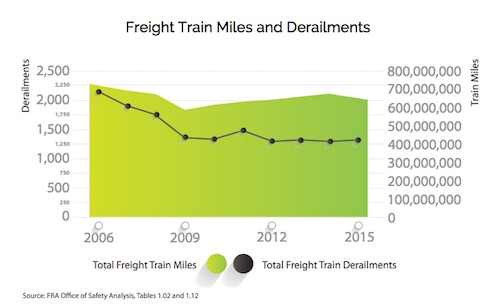 About 200 lives could be saved a year if 1 percent of the nation's 3 trillion annual vehicle miles traveled by motor vehicle were shifted to passenger trains, according to a new report from the OneRail Coalition.

The report also found that there's been a 31 percent decline in freight- and passenger-rail accidents in the United States,

The trend occurred even as passenger-rail traffic grew and freight-rail traffic remained steady over the same time frame, coalition officials said in a press release.

"Increasing market share for rail by getting more goods and people onto trains would save lives and reduce injuries, significantly improving the overall safety of the nation's transportation system," said Anne Canby, director of OneRail.

The report highlights factors that have bolstered rail safety, such as improvements to rail infrastructure, grade crossing programs like Operation Lifesaver Inc., new track inspection and monitoring technologies, and the strengthening of tank cars.