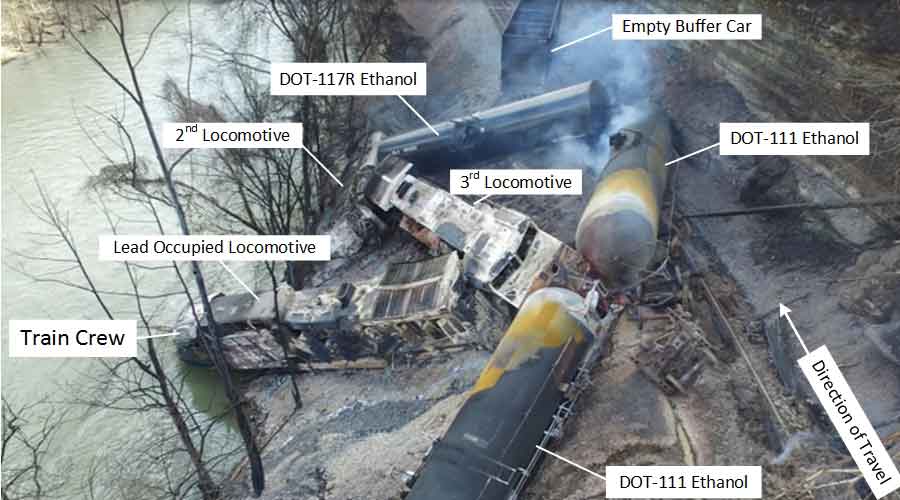 The National Transportation Safety Board (NTSB) has released a preliminary report on the derailment of a CSX high-hazard flammable key train in Draffin, Kentucky, last month.

The train, carrying denatured ethanol, derailed at 6:54 a.m. Feb. 13 in the CSX Kingsport Subdivision along a hillside adjacent to the Russell Fork River. The engineer and conductors sustained minor injuries, the NTSB report stated.

Before the incident occurred, the area received a substantial amount of rain, which led to a landslide that covered the tracks with debris. According to the train crew, the debris was as high as the nose of the lead locomotive. The engineer stated that sight distance had been around five car lengths due to rain, fog, curves and darkness.

The train had been traveling about 25 mph, which was within the operational speed of the tracks. The tracks were not equipped with positive train control, nor were they required to be.

The train crew escaped the burning lead locomotive by jumping into the river, where they were rescued by emergency responders. Six to 10 homes in the area were evacuated.

The NTSB's investigation will focus on hillside slide detection and weather alerts, and the performance of DOT-111A, DOT-117 and DOT-117R tank cars in this and other accidents. The agency also will examine the positioning of different tank car types in train consists.