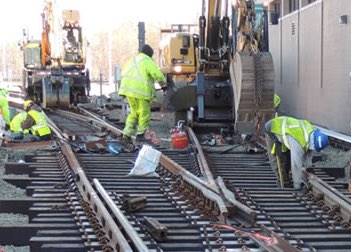 The violations include failing to comply with roadway worker protection rules, inconsistencies in following track maintenance standards and a lack of procedures to ensure metal debris isn't placed near electrified third rail, said FTA spokesman Steven Kulm in an email.

In total, the FTA has uncovered 109 "defects" in WMATA's implementation of the first two maintenance surges under its SafeTrack plan. In addition, the agency has directed the D.C.-area transit agency to perform 88 remedial actions regarding its execution of the plan; as of yesterday's announcement, WMATA still had 34 such actions to complete.

Earlier this week, WMATA announced that it had begun the fourth safety surge on a section of the Blue and Yellow lines.

Meanwhile, during the more than 200 inspections that the FTA has performed since taking direct safety oversight of WMATA in October last year, there have been 15 instances in which WMATA denied federal investigators access to its rail operations control center or trains.

However, these kinds of incidents have been "significantly reduced" after the FTA informed WMATA General Manager and Chief Executive Officer Paul Wiedefeld of the issue.

WMATA is the first subway system in the United States to be put under direct federal safety oversight.