Canada's TSB reveals cause of fatal 2017 derailment in British Columbia 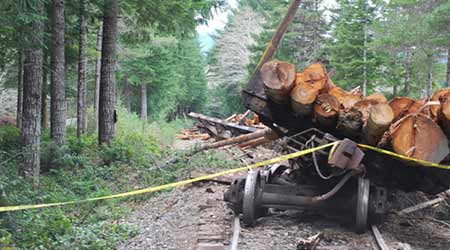 Unsuccessful coupling between rail cars and the failure of a derail protection device led to a fatal derailment in British Columbia in April 2017, the Transportation Safety Board of Canada (TSB) announced yesterday.

The incident occurred near Woss, British Columbia, when 11 cars loaded with logs rolled uncontrolled out of the Woss Reload Center, operated by Western Forest Products Inc. (WFP). The cars traveled over a derail and then re-railed at a switch, allowing the cars to leave the reload center and continue down the grade.

TSB’s investigation found that the uncontrolled movement had separated from the rest of the cars after a knuckle inadvertently released. Previously, the coupler was repaired by the installation of a top-operated locking block into the bottom-operated mechanism. Although the configuration is allowed, the locking block had not dropped fully into place during the coupling, TSB officials said.

However, the locking block did engage the knuckle tail sufficiently to pass the pull test, and the coupling was deemed secured, they added.

Investigators determined that when the uncontrolled cut of cars reached the derail, the lead truck of the lead car derailed as intended. However, the derail was damaged by the cars, rendering it ineffective for the remaining wheels. Although the derail installation was compliant with regulatory standards, it had not been installed or maintained to manufacturer and industry standards, TSB investigators determined.

Additionally, the the derail was situated on deteriorated softwood ties in an area of fouled ballast that was inhibiting proper drainage. It is a rare event for rolling stock derailed by a derail to re-rail, they said.

The TSB also determined that the railway did not follow emergency procedures.

Soon after the incident, the TSB issued a rail safety advisory to the British Columbia Ministry of Transportation and Infrastructure (MOTI) relating to the installation, maintenance, and inspection of derails at WFP. MOTI had asked the TSB to investigate the incident.

In November 2017, WFP announced the closure of the Englewood Railway.

After its investigation was completed, the TSB also issued an advisory to the railway industry and regulators, calling for the use of the visual verification method to ensure couplings are secure.