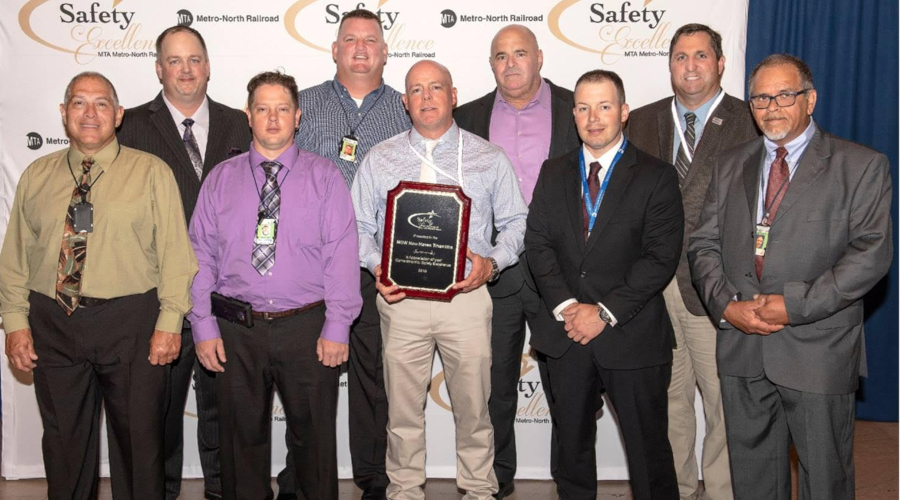 The railroad’s maintenance-of-way “housekeeping initiative” on the North White Plains section of the Harlem Line earned a safety excellence award in the company-wide initiatives category. As part of the program, employees found more than 200 ways to enhance the railroad’s safety and productivity. Due to the success of the initiative, similar endeavors are now being rolled out throughout the railroad, Metro-North officials said in a press release.

In the group category, the New Haven Tinsmiths were awarded for developing and fabricating sign holders for working limit stop signs along the New Haven Line. Used during long-term outages, the signs keep both employees and customers safe and minimize maintenance time since they only require a one-time installation, Metro-North officials said.

Matthew Higgins, a locomotive engineer, was honored for spotting extensive erosion and washout damage on a section of track on the Harlem Line, spurring its immediate shutdown and subsequent 22-hour repair work to bring the compromised track to a state of good repair.

Locomotive engineer Wayne Ebanks was recognized for his role in implementing cab intrusion signage to be displayed in the engineers’ cabs and adding speed restriction sign scenarios to engineer training simulators. He is also an active member of C3RS committee.

Finally, Fred Chidester, recently retired director of Grand Central Terminal, was awarded for calling in 32 potentially dangerous incidents on the rails in 2018.

The award recipients were chosen by a committed comprised of Metro-North employees from various departments.