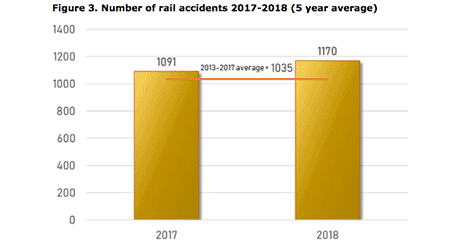 Canada logged a 7 percent increase in rail accidents in 2018 over the previous year, but posted fewer fatalities, according to a preliminary report by the Transportation Safety Board (TSB).

Rail transportation data for 2018 showed "mixed results," with 1,170 railway accidents reported to the TSB, up 7 percent. However, rail-related fatalities declined to 57, which was 19 fewer than in 2017 and well below the five-year average of 74, according to the report.

Among the 2018 fatalities, 34 involved trespassers, compared with 53 in 2017. The five-year average for trespassing-related fatalities is 41.

Crossing accident fatalities remained at 19 last year, the same as in 2017. However, the number of serious injuries due to crossing accidents nearly doubled last year — to 42 — compared with 22 in 2017.

"To better understand these data, the TSB will examine underlying factors for crossing accidents," the report stated.

Among all rail accidents reported to the TSB in 2018, 125 involved dangerous goods. That's higher than the 115 reported in 2017, but down slightly from the five-year average of 126. Six accidents last year resulted i the release of dangerous goods.

There were 285 rail incidents reported in 2018, a 21 percent increase from 2017 (235), but a 7 percent decrease from the five-year average (308). The decrease is partly due to the retroactive application of a June 2016 regulatory change by Transport Canada that revised the criteria for a dangerous goods leaker from a volume-based threshold to outcome-based consequences, resulting in the re-categorization of a number of occurrences, the TSB report stated.

Consequently, the number of dangerous goods leak incidents between June 2016 and December 2018 fell from 78 to one.  Almost half (137) of all rail incidents in 2018 were "movement exceeds limits of authority" incidents — 15 more than in 2017 and above the five‑year average of 125.