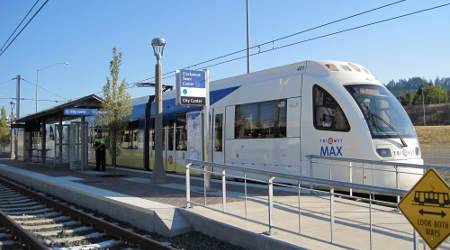 Oregon is the latest state to have its transit-rail safety oversight program certified by the Federal Transit Administration (FTA).

Under federal law, states with transit-rail systems have to get their safety oversight programs certified by April 15, 2019. To achieve certification, a state must establish a safety oversight agency that's financially and legally independent from the transit agency it oversees.

The state safety oversight (SSO) agency also must have investigatory authority, as well as the financial and human resources to accommodate the size and complexity of the rail systems it's overseeing, according to an FTA press release.

As the designated SSO agency for Oregon, the Oregon Department of Transportation will provide safety oversight of the Tri-County Metropolitan Transportation District's light-rail system and the Portland Streetcar.

States that miss the April 2019 deadline risk losing federal transit funding. So far, SSO programs in 13 states and the District of Columbia have been certified.

In total, SSO programs in 28 states, the District and Puerto Rico must be approved by the deadline.

FTA is reviewing SSO applications from 12 states, according to the administration's June 12 certification status table. Florida and New York have yet to submit their applications.

Although Virginia, Maryland and the District have had their individual SSO programs certified, they're still required to submit a separate joint application for oversight of the Washington Metropolitan Area Transit Authority's rail system.