NTSB zeros in on grade-crossing in Biloxi crash 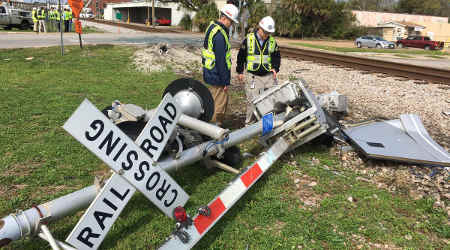 The National Transportation Safety Board (NTSB) wants to know why a grade-crossing in Biloxi, Miss., has been the site of multiple accidents prior to Tuesday's fatal train crash.

The latest accident occurred Tuesday afternoon when an Echo Transportation motor coach was traveling north on Main Street in Biloxi when it got stuck at the crossing and was unable to move before a CSX freight train crashed into it. Four people who had been on the bus died.

"The NTSB is very concerned about grade-crossing accidents, and this one is particularly of concern to us," said board member Robert Sumwalt in a video statement posted yesterday on the NTSB's website. "We want to know, what is it about this crossing?"

An NTSB team of investigators and experts will be at the scene for five to seven days. The Federal Railroad Administration (FRA) also sent investigators to the site.

Since 1976, the crossing has been the location of 16 vehicle-train crashes and two fatalities prior to Tuesday's accident.

A sign posted ahead of the crossing indicates it is "humped" and has low ground clearance.

The train, consisting of three engines and 52 cars of mixed freight, was on its way from New Orleans to Waycross, Ga., when the crash occurred in Biloxi. The train's speed was about 19 mph when it collided with the bus, pushing it about 200 feet. The engineer placed the train in "emergency" mode in an attempt to stop about 500 feet prior to the collision.

There were 2,025 accidents resulting in 265 fatalities at crossings last year in the United States, according to the NTSB.

The FRA and NTSB have made crossing safety a high priority. Earlier this year, the FRA launched an ad campaign to warn motorists about the risks of trying to "beat the train" at crossings.