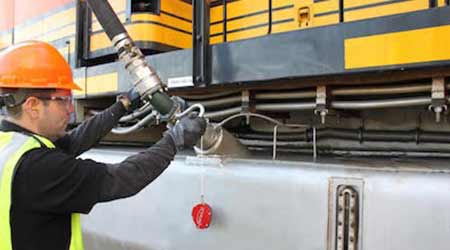 SpillX Velocity is a locomotive fueling system developed by MPL Innovations Inc. to bring high velocity aviation fueling technology to the railroad industry. SpillX has been designed to reach fueling rates up to 600 gallons per minute using a dry break connection that reduces the chance of spills and leaks and improves safety.

The dry break nozzle attaches to fuel cranes or DTL trucks using the standard 2-1/2" cam lock connection and installation takes less than 5 minutes. Similarly, the locomotive mounted components have been designed so that they can be installed in a matter minutes with no modification to the locomotive tank.

The pressure drop of the SpillX nozzle and receiver is significantly less than the current system, which allows for higher flow rates at the same fueling pressure. The result is increased fueling rates of up to 75 percent or more by simply changing to SpillX components and maintaining the same pressure at the nozzle, according to MPL Innovations.

The system does not introduce air into the system, thus there is no diesel foaming during fueling at these higher flow rates. Dry-break connections on the nozzle and receiver ensure fueling connection safety while fueling, and keeps the fuel contained in a closed system at disconnect.

In addition to the ability to increase flow rates, the system also offers an internal hydraulic shut off mechanism which serves as the automatic overfill protection. This hydraulic mechanism stops the flow of fuel into the locomotive even when the nozzle is still connected and open. The jet level determines the maximum level has been reached and causes the receiver to begin a gradual shut off of fuel into the tank. This shut off occurs over a period of 5 to 10 seconds, which virtually eliminates the "fluid hammer,” MPL Innovations says. The gradual shut off prevents pressure spikes in the line and reduces wear and tear on pumps and infrastructure.

The SpillX Velocity system has been evaluated by a wide range of railroads across North and South America, and is currently undergoing long-term testing at several strategic fueling locations, MPL Innovations says.  The system will help bring railroad fueling technology into the 21st century and provide safe, reliable fueling operations to railroads around the world, the company says.

To learn how freight railroads are reducing fuel consumption, and the products and services they're using to work toward that objective, read this article in the July issue.