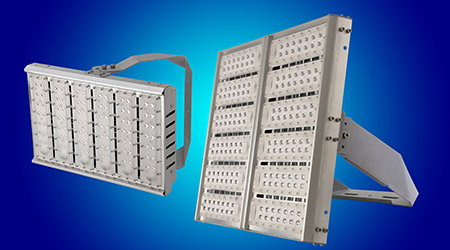 LEDtronics® has introduced its brightest light in the company’s 30-year history: the LED High Mast Flood Lights. They’re on the DLC list of approved products, making them eligible for rebates, according to the company.

The lumen output of the HPF series ranges from 33,000 to 99,000 lm. These DLC-listed LED High Mast Flood Lights output a greater amount of light than any product among the company’s over 12,000 part numbers, according to LEDtronics.

The slim, modern design of the LED High Mast Flood Lights come in a range of wattages that only consume 300 to 900 watts, but replace HID lights of 1000 all the way up to 2000 watts, LEDtronics says. The extremely high light output makes the product ideal for such applications as stadiums, arenas, tennis courts, golf courses, playgrounds, industrial plants and many other facilities.

High-mast lighting is commonly installed in very difficult-to-reach areas, which means sending maintenance workers to the lights is inconvenient and expensive. The LED units are extra lightweight and feature an adjustable yoke, making them easy to install, according to LEDtronics. They also have a lumen maintenance of over 70 percent at 50,000-plus hours, or well over five years, the company says.

In addition, the units have an IP65 safety rating, makoing them suitable for wet locations. Their solid-state construction renders them impervious to shock, vibration, frequent switching and environmental extremes, according to LEDtronics.