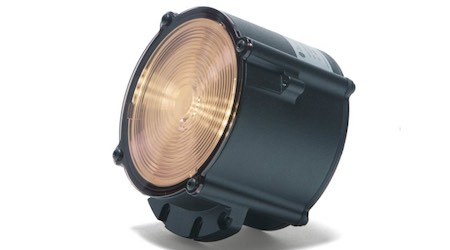 GE's energy services company Current has released the Ace™ LED railway signal. The lamp is a white LED module designed for use behind current transit and railway wayside housings with existing colored lenses, and is a direct retrofit for incandescent applications, company officials said in a press release.

"Ace by Current is a one-for-all fit," said Natalie Picot, product manager at Current. "We've designed this white LED signal keeping in mind the requirements of our customers. Our goal is to provide them with a retrofit solution to minimize labor and maintenance expenses while ensuring reliability and robustness."

By stocking just one LED signal, railroads can benefit from streamline supply chain, ease of stocking and overall simplification, Picot added. The Ace signal replaces the need for red, yellow and green signals to just one white LED module which works behind existing lenses.

Where needed, custom brackets are also available for a more precise fit. Ace signaling modules are engineered to meet military radiated immunity standard 50V/m MIL-STD-461F, which exceeds the AREMA 7.1.10 standards, according to GE. The LED module's self-contained design protects it from dust and moisture, which boosts the product's lifespan and performance.