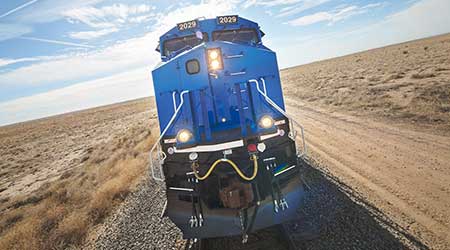 GE Transportation, a global technology leader and supplier to the rail industry, is showcasing several digital industrial technologies at this year’s Railway Interchange that have achieved significant milestones.

The technology being developed by GE Transportation is connecting the entire rail ecosystem. The outcomes delivered through this connection are optimized networks, minimized downtime and reduced operating costs.

GE Transportation’s Evolution Series Tier 4 locomotive is the first freight locomotive to meet the strict Tier 4 emission regulations set by the U.S. Environmental Protection Agency (EPA). GE's smartest locomotive has more than 200 sensors onboard, processes over a billion instructions per second and provides about 10GB of data per locomotive year.

Trip Optimizer, the autopilot software for railroads that builds an optimal operating plan based on data collected about the train's characteristics, has reached 100 million auto-control miles. This solution has helped the rail industry decrease fuel costs, reduce emissions and improve bottom lines, since its production launch in 2009.

Customers have seen fuel savings of 3 percent to 17 percent depending on the type of train service and rail topography, with average savings for the fleet estimated at 10 percent. Improved fuel efficiency brings related emissions savings, and customers experienced an average 10 percent reduction in emissions. It is certified by the EPA as an emissions savings energy-management system.