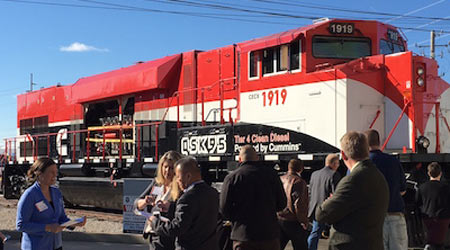 A locomotive featuring a Cummins Inc. low-emission engine so far is pulling its weight, so to speak, in an ongoing field test at the Indiana Rail Road Co. (INRD). That’s how test findings were described during an event held Nov. 9 at INRD’s terminal near downtown Indianapolis to highlight Cummins’ demonstration of the engine, which meets the U.S. Environmental Protection Agency’s (EPA) Tier 4 emission standard.

Cummins — which produces more than 1 million engines annually — purchased a former Union Pacific Railroad SD90 MAC Phase II, six-axle locomotive for the field test and completely overhauled it. The original EMD265H 6,600-horsepower engine was replaced by Cummins’ 16-cylinder QSK95 engine. In addition, the locomotive was stripped down to its chassis and rebuilt from the deck up, excluding the traction inverter system. 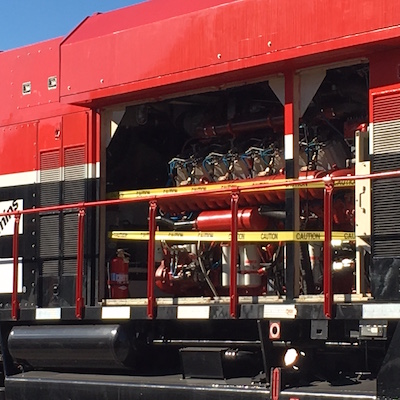 The QSK95 engine has 16 cylinders and weighs more than 30,000 pounds. Photo: Jeff Stagl

Also designed for power generation and marine applications, the QSK95 meets Tier 3 emission requirements without an exhaust after-treatment system. The engine can be used in 4,000-, 4,200- and 4,400-horsepower rail applications, including both freight and passenger locomotives.

Weighing 30,335 pounds, the QSK95 Tier 4 engine reduces nitrous oxide and particulate matter emissions by 89 percent and 98 percent, respectively, and cuts fuel consumption by 16 percent compared with conventional Tier 0 engines, according to Cummins. It also uses less oil and fluids than other medium-speed engines, and features fewer parts than other high-speed engines, the company says.

Cummins spent six years to design and develop the QSK95 engine at a cost of $900 million for R&D and $450 million for capital expenses, said Jim Trueblood, the company’s vice president of high horsepower engineering, at the event. So far, Cummins has sold more than 250 of the engines worldwide, with the QSK95 now employed in more than 20 countries, he said.

The field test for the Tier 4 engine’s first U.S. freight-rail application began in March at INRD. Cummins and INRD officials reached an agreement for a yearlong test, which potentially could be extended. The railroad was a good candidate as a test case because it has a long history of analyzing emerging technologies — such as remote-controlled locomotives — and operates a relatively new locomotive shop, said INRD Senior VP of Operations and Business Development Bob Babcock.

“Cummins needed input from a railroad, so we felt like a true partner in this,” he said.

INRD is using the Tier 4 locomotive to haul coal, grain, intermodal freight and other commodities, and so far has noted fuel savings and stronger acceleration compared with the regional’s other motive power, Babcock said.

“We’re running it through its paces,” he said.

Engineers can operate the Tier 4 locomotive the same way they operate the railroad’s other locomotives, which was a key stipulation for INRD, said Babcock. The test unit also “does what it’s supposed to do” once the throttle is hit and can be connected in multiple-unit power — two other important requirements, he said.

Cummins is monitoring QSK95 field tests in a passenger-rail application, too. Siemens is using the engine to power its Charger diesel-electric locomotives, which are undergoing tests at the Transportation Technology Center Inc. in Pueblo, Colo., and eventually will be used in six states. Those locomotives are rated at 4,400 horsepower and can reach speeds up to 125 mph, according to Cummins.