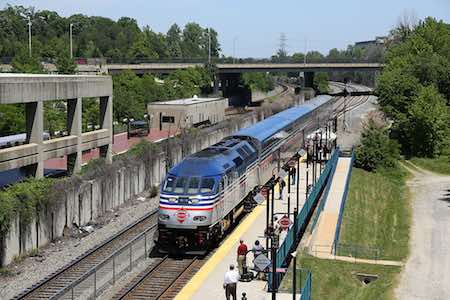 In addition, the railroad's weekly ridership surpassed 100,000 for the first time in its history.

VRE officials contributed the jump in ridership to the start of WMATA's SafeTrack maintenance plan, which calls for several long-duration track outages. On July 5, for instance, WMATA closed sections of its Blue and Yellow Metrorail lines in northern Virginia.

Those Metrorail lines generally parallel VRE's rail lines and serve many of the same destinations, allowing WMATA riders to easily transition to VRE.

"It's been exciting to introduce a whole new group of people to VRE and to get their feedback on our service," added VRE Director of Rail Operations Chris Henry. "It's our hope that some of these riders continue to utilize VRE and integrate us into their regular travel routine."

Many of the new riders were able to take advantage of VRE's mobile app, which experienced a spike in downloads during the last two weeks.

The next WMATA SafeTrack maintenance "surge" begins today and involves single-tracking on the Orange and Silver lines between the East Falls Church and Ballston neighborhoods in Arlington, Va. VRE's Manassas Line will serve as an alternative for some Orange Line riders.