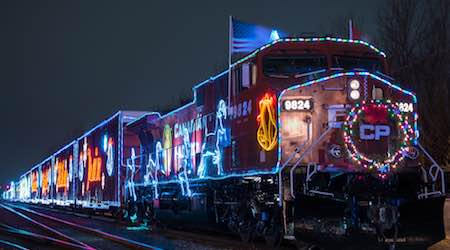 The 18th annual Canadian Pacific Holiday Train is on track to raise 1.2 million Canadian dollars and collect 250,000 pounds of food, the Class I announced last week.

Food banks are continuing to count money raised and weigh the food donated at each stop this year, CP officials said in a press release. The program is expected to have collected more than CA$13 million and four million pounds of food since its inception in 1999.

This year, the railroad's U.S. holiday train ran from Nov. 25 through Dec. 15, while the Canadian one began on the same date but finished Dec. 17.

"With the need for food banks continually increasing in both Canada and the U.S., the importance of the CP Holiday Train program in the community is also increasing," said CP Chief Executive Officer E. Hunter Harrison. "Beyond food and monetary donations the CP Holiday Train generates goodwill, raises spirits and helps people start the holidays off on the right foot."

The Holiday Express made its last trip of the year in Barstow, Calif. The train carried 2,100 passengers this year.

On Dec. 10, Chicago's Metra wrapped a train in holiday colors for its "Operation North Pole" event, which provided a holiday-themed ride for 71 families with children suffering life-threatening or terminal illnesses, Metra officials said in a press release. This was the eighth year the commuter railroad held the event.

On the West Coast, Caltrain collected nearly 2,500 and raised almost $2,500 during its Holiday Train weekend in early December. Toys donated at stations during the event benefited the Salvation Army Season of Sharing Program.

Since Caltrain's first Holiday Train in 2001, more than 55,000 toys have been distributed to San Francisco Bay Area children who might not otherwise receive gifts during the season.

In Los Angeles, the Holiday Trainfest and ToyDrive took place Dec. 17. The event featured a Santa-themed "sleigh" with vintage rail cars. Staff were on hand to collect donations of new, unwrapped toys in support of Toys for Tots, and also to accept new socks to assist the Los Angeles Homeless Services Authority.

That event was presented by the Los Angeles-San Diego-San Luis Obispo Rail Corridor Agency and the Amtrak Pacific Surfliner in partnership with the Los Angeles County Metropolitan Transportation Authority, Metrolink and others.