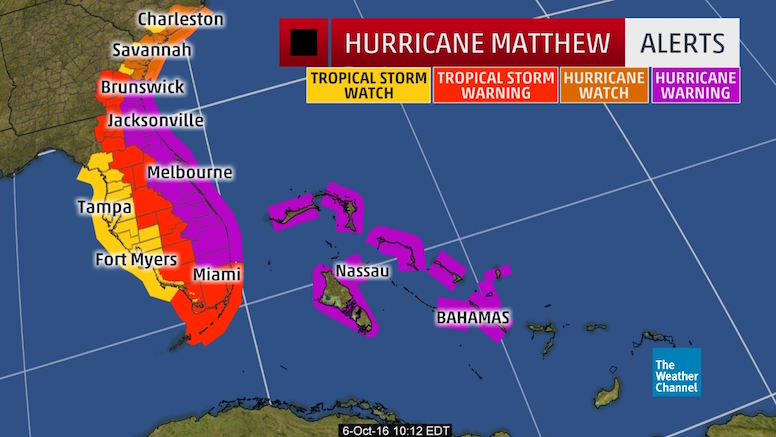 Freight and passenger railroads in Florida and the southeast United States are taking precautions in preparation for Hurricane Matthew.

Norfolk Southern Railway announced it is repositioning rail equipment away from the the Southeast coastal areas and moving shipments inland to secured rail yards. To alleviate congestion in the affected areas, traffic en route is being held at NS yards throughout its system, according to an alert on the Class I's website.

NS' engineering department is staging ballast trains, equipment and generators in order to be prepared to begin storm recovery efforts when it's safe to do so.

Meanwhile, CSX announced it has activated its hurricane operational plan. CSX's precautions include:
• Operations on the main line in Florida from Auburndale through Orlando and Sanford areas into Jacksonville will be suspended by late this afternoon.
• The main line from Savannah, Ga., to Pembroke, N.C., has been reduced to passenger and time critical operations only.
• Switching operations in Savannah, Ga.; Charleston, S.C.; and Wilmington, N.C., have been halted until after the storm passes.

Amtrak announced on its website that it has suspended service in the Southeast region.

Also, Florida's passenger-rail service SunRail announced that it will suspend service starting this afternoon. Its last southbound train departs DeBary at noon, and the last northbound train will depart Sand Lake at 1:15 p.m. SunRail will not operate normal service on Friday, nor special event service on Saturday, according to SunRail's website.

The Weather Channel was reporting this morning that Matthew is a Category 4 hurricane, and has the potential to be the strongest strike in east Florida and Georgia in decades.