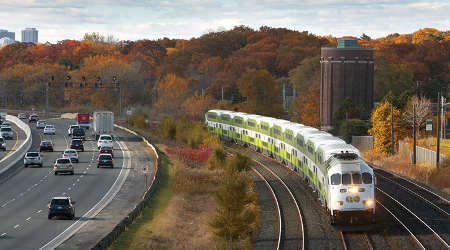 The Ontario Ministry of Transportation has released a report on the technical and economic feasibility of using hydrogen-powered trains to electrify GO Transit's rail service.

The study determined that it would be feasible to use hydrogen fuel cell technology as an alternative to traditional overhead wires. The lifetime cost of building and operating the hydrogen-powered system is equivalent to that of a conventional electrification system, the study found.

Ontario is working with trainmakers Alstom and Siemens to produce concept designs that incorporate hydrogen fuel cells into bi-level trains, according to a press release issued by the Ontario Ministry of Transportation.

The province also is issuing a request for proposals for designs of a hydrogen fuel cell-powered locomotive, which could lead to a prototype that would be tested on GO Transit's rail network.