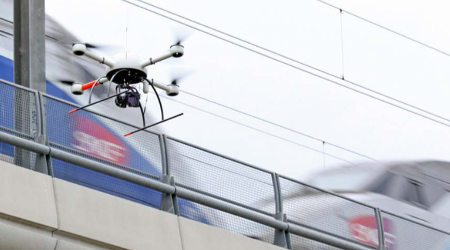 The April 19 workshop will provide an opportunity for attendees to learn more about how emerging UAS technology can benefit their operations, NCDOT officials said in a press release.

Over the past year, more than 650 attendees of the department's workshops have learned about UAS operations, data management and dozens of various applications for government and commercial users.

"Drone technology is quickly advancing and so are the possibilities for a business or government organization interested in using one," said Basil Yap, UAS program manager for NCDOT's Division of Aviation.

Registration for the event will close on April 17.

Railroads are now using drones for various purposes. The Federal Railroad Administration recently reported on international railroads' use of drones.

Meanwhile, The Wall Street Journal reported yesterday that Union Pacific Railroad has used drones to ensure rail yard workers are following safety guidelines. But some workers have said that the drones are creating a hazard by being a distraction, according to Steve Simpson, general chairman of the International Association of Sheet Metal, Air, Rail and Transportation Workers.

"They are no longer looking ahead or at their task at hand," Simpson told the newspaper. "They are looking up."

The Class I has temporarily suspended the aerial observation so that it can share the findings with the union. It will resume the program in the future, a UP spokeswoman told the newspaper.