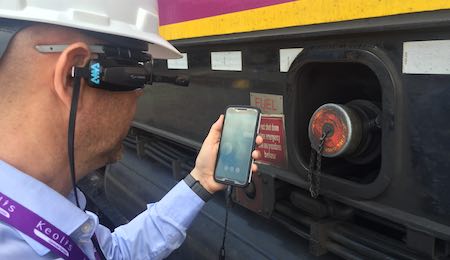 Keolis Commuter Services is piloting the use of virtual reality glasses in its operation of the Massachusetts Bay Transportation Authority's (MBTA) commuter-rail network.

Field technician teams will use the glasses to transfer live video and other information to senior technicians at the main maintenance facility, Keolis officials said in a press release.

Developed by AMA XpertEye, the glasses allow for screen captures and image annotation, with encrypted data transmitted via the internet. The technology is aimed at allowing Keolis maintenance experts to more quickly and efficiently diagnose issues and reduce repair times on equipment that may be in remote locations, company officials said.

The trial of the virtual reality glasses is one of several recent Keolis initiatives that "harness leading edge technology to benefit passengers and clients," according to the company. Earlier this year, Keolis' customer-facing teams in Boston received 400 handheld devices with an internal app designed by Keolis that provide real-time status reports on the commuter-rail system.

This app enabled Keolis conductors to provide passengers with useful and accurate information in a timely manner, the company said.

Keolis has been operating the MBTA's commuter-rail network under an eight-year contract that started in January 2014.

To learn about other new and emerging technologies being used in the rail industry, read this feature from Progressive Railroading's September issue.