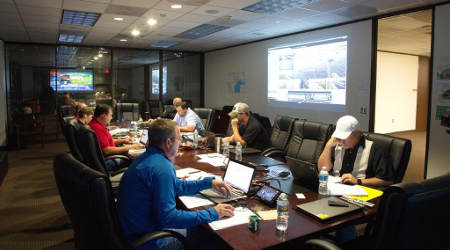 Freight and passenger railroads in the Houston area have begun restoring service in the wake of Hurricane Harvey.

BNSF Railway Co. announced yesterday that service has resumed on its Houston Subdivision, as well as on a greater portion of its Galveston Subdivision.

The Class I also expected to have service restored on its Conroe Subdivision between Somerville and Dobbin by yesterday afternoon, BNSF officials said in an update to customers.

And while BNSF's South, Dayton and Casey yards have reopened with limited operations, the yards at Silsbee, Galveston and Beaumont, Texas, remain closed due to flooding.

In addition, train loading and unloading operations have resumed at the BNSF's Pearland Intermodal Facility. The railroad's engineering teams continue to inspect and evaluate affected areas.

"Our command center is operating around-the-clock to coordinate our efforts throughout the region," BNSF officials said. "We are also working to implement an additional reporting tool to assist customers in submitting information to BNSF on the status of their shipping and receiving facilities that will help further enable the recovery."

Yesterday, crews focused on repairs between Houston and San Antonio to operate trains between the cities, UP reported in a service update.

Bridge inspections and track and signal repairs will continue where UP has access. In areas without road access — such as in the Baytown, Texas, area — the railroad will use helicopters and drones to inspect infrastructure.

Meanwhile, Amtrak has resumed service on its Texas Eagle route between San Antonio and Fort Worth, Texas, following work by host railroads BNSF and UP. Amtrak's Sunset Limited remains closed east of San Antonio due to temporary track closures.

Houston METRO also has restored limited transit-rail service on its Red Line between the Fannin South Station and the Downtown Transit Center. The agency's Green and Purple rail lines will remain suspended until further notice.