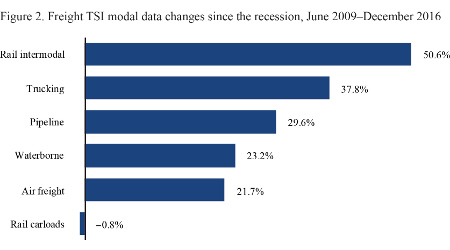 All but one of the major freight modes grew since the recession ended in June 2009, with rail intermodal growing the fastest, the U.S. Department of Transportation's Bureau of Transportation Statistics (BTS) reported last week.

From June 2009 to December 2016, the rail-intermodal mode grew 50.6 percent based on seasonally adjusted data that comprises the freight Transportation Services Index (TSI), BTS officials said in a press release.

The data showed that the growth in rail intermodal since the recession's end was followed by trucking at 37.8 percent, pipeline at 29.6 percent, water­borne at 23.2 percent, and air freight at 21.7 percent. During the same period, the freight TSI rose 29.7 percent.

All modes declined during the recession.

After reviewing recent freight movement, BTS officials determined that transportation services — as measured by the TSI — continue to lead the economy. The TSI tends to turn in advance of slowdowns and accelerations in economic growth, they said.