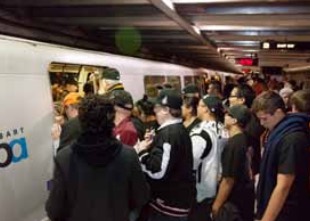 Points can be exchanged for small cash rewards or used to play a "Spin to Win" game for a chance to win additional points or random cash rewards between $1 and $100. Each month, reward balances will be transferred to participants' PayPal account.

Known as "BART Perks," the program is based on similar programs around the world, BART officials said in a press release. The agency hopes to attract at least 10,000 participants over the next six months.

"Our goal is to see if we can shift riders to less crowded times, which will improve everyone’s experience on BART," said Gail Murray, a BART board member. "It can also improve BART's on-time performance during the rush since trains will have shorter dwell times at each station due to less crowding."

Murray championed the idea after hearing about a similar program in Singapore.

The pilot's data will be used to determine how much BART riders are willing to change their arrival and departure times when provided an incentive.