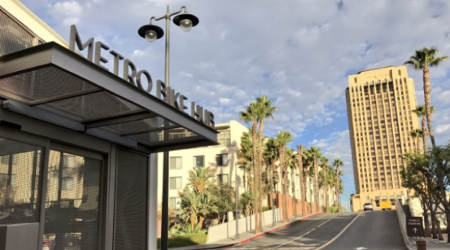 The $2.5 million bike hub is one of the largest secure-access bicycle parking facilities of its kind on Metro's system, agency officials said in a press release.

Located next to the north breezeway of Union Station West, the 3,000-square-foot facility can accommodate nearly 200 bicycles under a controlled entry system with closed-circuit television surveillance.

The new facility also will support a range of bicycle-related services, including same-day repairs, accessory sales and bike-related clinics and classes for mutimodal transit riders. 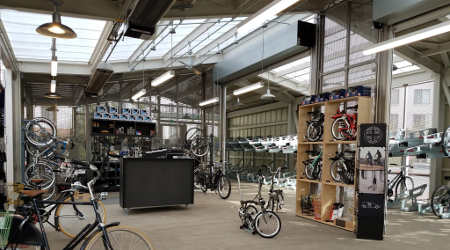 "Metro is committed to providing Angelenos with sustainable, healthy alternatives to driving — whether they're commuting to work, or taking a trip across the region,” said Los Angeles Mayor and Metro Chair Eric Garcetti. "This safe, secure bicycle parking center connects cyclists with one of our city's most active transportation hubs and encourages more people to get where they’re going on two wheels."

Metro operates two other bike hubs: one at the Hollywood/Vine Station on the Red Line, and another at El Monte Transit Center regional bus station. The agency's growing network of bike parking facilities allows bicycle commuters to leave their bikes at stations and avoid having to bring them on crowded trains.

The bike hubs also provide a way to circumvent the "first- and last-mile" problem, which is a common barrier for many would-be transit commuters, Metro officials said.

Meanwhile, Metro and ride-sharing company Via formed a new partnership that will enable passengers to book rides directly to three of the agency's stations.

Using the Via app, riders will be able to reserve a ride in a shared, dynamically-routed vehicle to or from three major Metro stations. Via's algorithm matches passengers that are heading in the same direction.

The project is funded in part by a $1.35 million grant from the Federal Transit Administration for technology designed to bridge the first- and last-mile gap.

Via also will collaborate with Metro's Office of Extraordinary Innovation to improve access to public transit, company officials said in a press release. The so-called "mobility-on-demand" project is expected to begin in summer 2018.