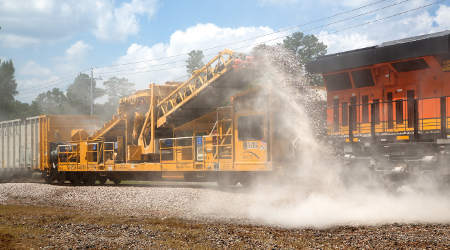 UP has gained access to its rail line near Crosby, Texas, and crews have begun repairs and restoration to the two lines that link Houston and Beaumont, Texas.

"Work is progressing well and we anticipate opening up one, if not both, of these lines within 48 hours," UP officials said in a customer service announcement.

UP also announced:
• The Baytown branch line from Market Street Yard through Baytown to Dayton, Texas, is back in service.
• Flooding remains an issue in the Beaumont, Orange and Port Arthur, Texas, areas. UP is inspecting and repairing track as access allows.
• Where routes were open and crews available, UP's southern region was operating trains at normal levels yesterday.
• The transportation plan is being adjusted to route trains around out-of-service line segments. The change in traffic flows has created challenges for crew availability. Where possible, crews are signing up and training on temporary location assignments to assist in the recovery effort.

KCS has opened its Rosenberg subdivision to permit cross-border traffic to and from Houston.

"However, due to the continued saturated conditions of the land and continued repair work, strict speed limits of 10 mph are in effect," KCS officials said in a service status report. "Delays should be expected on all routes for some time while we reduce backlog and respect imposed speed restrictions given the conditions and repair work."

In other KCS-service areas:
• The Beaumont subdivision remains closed, but conditions are improving. The Sabine River water level has dropped, which has allowed roads to open to allow crews to assess the subdivision.
• South and northbound cross-border embargoes for Houston, Corpus Christi, Victoria, Rosenberg to and from Laredo, Texas, have been lifted.
• Embargoes for traffic through the Beaumont subdivision remain in effect.

Meanwhile, financial donations from rail industry businesses continue to roll in. Among the latest is the Norfolk Southern Foundation, which announced late last week it is donating $100,000 and will match NS employee gifts to assist in Hurricane Harvey recovery efforts. The foundation is the charitable arm of Norfolk Southern Corp.

"We believe it's important for corporate America to step up and support the people of Houston and surrounding areas in this time of need," said NS Chairman, President and Chief Executive Officer James Squires in a press release.