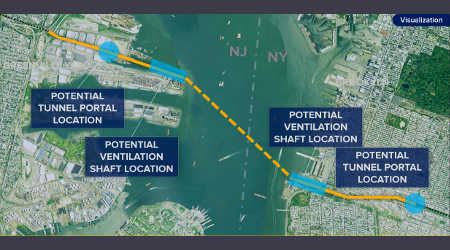 A request for proposals (RFP) has been issued for a Tier II environmental study, advanced planning and engineering work for the proposed Cross Harbor Freight Movement Project, which would connect New York City directly to the national freight-rail grid.

The Tier II study will explore the development of a cross-harbor freight tunnel, which was identified in a Tier I environmental study as a way to alleviate severe traffic congestion, reduce dependence on aging roads and bridges, and solve the region's freight problem, according to a press release issued by Gov. Andrew Cuomo's office.

The tunnel would connect an existing rail yard in the Greenville area of Jersey City, N.J., to existing rail infrastructure in Brooklyn, N.Y.

The Port Authority of New York and New Jersey (PANYNJ) issued the RFP, and has committed up to $35 million for the study and has available up to another $35 million for further design and engineering.

Trucks transport 90 percent of the freight, while rail handles 2 percent to 3 percent. Most freight arrives by rail at points west of New York City and relies on trucks to reach its final destinations. The new freight-rail tunnel would remove 1,800 trucks from New York Harbor crossings per day or a half million trucks per year, Cuomo administration officials said.

In the next 20 years, freight to, from and through the region is expected to increase by at least 37 percent — which is beyond the capacity of the region's roadways, they said.

The PANYNJ and Federal Highway Administration completed the Tier I study in 2014, with the record of decision issued in 2016.