Metrolink last week launched the first version of its mobile ticketing app, which allows riders to purchase fares on smartphones, tablets or other mobile devices.

The app is the first of its kind in the Southern California commuter railroad's 23-year history, Metrolink officials said in a press release. 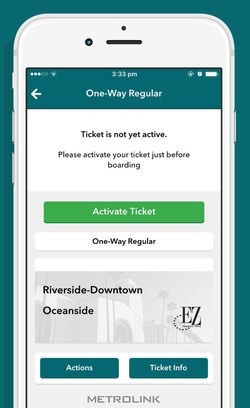 During March, only riders on the Inland Empire-Orange County Line will be able to use the app to purchase tickets and connect to local bus operators. This will give Metrolink the opportunity to test the app and make any improvements before implementing it systemwide.

"By taking a phased approach in the implementation of our new app, Metrolink intends to make regular improvements and upgrades based on feedback from our users," said Metrolink CEO Art Leahy.

By this month's end, mobile ticketing will be expanded to the entire Metrolink system and will include free transfers to participating bus operators.

In fall, barcode readers will be installed at the Los Angeles County Metropolitan Transportation Authority's rail fare gates, which will enable passengers throughout the Metrolink system to buy tickets on the mobile app and continue their commute on dozens of city bus, shuttle bus, light-rail and subway lines. Metrolink also is working with Amtrak to allow mobile tickets to be scanned by the national intercity passenger railroad's conductors.

Metrolink's app uses the Masabi JustRide mobile ticketing system, which is used by other transit agencies in the United States and Europe.