The Internet of Things: A world of opportunity for railroads 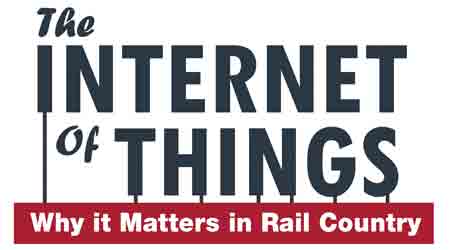 The Internet of Things (IoT) is but one of the phrases bandied about to characterize the advanced connectivity of devices, systems and services that goes beyond machine-to-machine (M2M) communications. It covers a variety of protocols, domains and applications. In addition to IoT, there’s the Industrial Internet, the Internet of Everything and variations on each as the concept continues its creep into the branding realm. For this month’s series of articles, we’ll stick with IoT.

IoT enables freight and passenger roads to use sensors, software M2M learning, “Big Data” analytics, cloud computing and other technology to gather and analyze information from various sources and data streams — and then use those analyses to drive efficiencies, better manage operations and, possibly, offer new services.

IoT, then, represents a world of opportunity for railroads and the technology providers that serve them. And it’s a world strategists in all railroad departments — from information technology (IT) to transportation to engineering to mechanical to communication and signaling — will need to tap into and be engaged with as the digital evolution continues.

“It’s not ‘Build it and they’ll come’ — it’s ‘What is the outcome you want to drive?’” says Jamie Miller, president and chief executive officer of GE Transportation, which now characterizes itself as a global digital industrial supplier to the rail, mining, marine, stationary power and drilling industries. “From there, you work backward into the data.”

From AEI to IoT

In rail country, the data seeds were sown with automatic equipment identification (AEI) tags, the first of which were installed in North America in 1989. A train crew received a message from a wayside detector, and AEI readers updated a database with passing and directional information. They were passive tags; the power was supplied by the reader.

When the Internet entered the mainstream in the mid-1990s and the general public was well on its way to untangling the Web, North American railroads weren’t exactly early adopters. But some of their customers were. At Procter & Gamble, brand manager Kevin Ashton put radio-frequency identification (RFID) tags on packages as they moved through the supply chain, and then linked them with the Internet.

In 1999, Ashton coined the “IoT” term, using it in the title of a presentation he made at P&G, or so conventional wisdom/IoT lore goes.

From there, Ashton and others — including Dierkx, who in the late 1990s worked for sensor analytics firm Savi Technology Inc. and served with

Ashton as a technology board member of the Massachusetts Institute of Technology’s Auto-ID Center — continued to ponder the possibilities connectivity/IoT afforded within the supply chain.

Railroads, in the meantime, continued to install trackside AEI readers, and more and more rail cars featured RFID tags. The AEI sensors could provide information on rail-car location and then interact with an increasing array of monitoring and detection devices to provide an even more detailed view of the conditions of the cars, as Dierkx noted in a 2009 white paper he penned for IBM titled “The Smarter Railroad: An Opportunity for The Railroad Industry.” 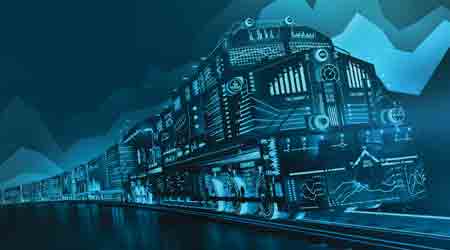 GE Transportation now characterizes itself as a global digital industrial supplier. For good reason: The company's Evolution™ Series Tier 4 locomotive features more than 200 onboard sensors that monitor performance and health and process more than 1 billion instructions per second.
Source: GE

“It’s like those Russian nesting dolls,” says Dierkx, who works with railroads around the globe on a range of IT and business transformation issues, including the use of predictive analytics. “Nested visibility is where this started.”

And as the rail industry became “more instrumented, interconnected and intelligent,” business model innovation became more attainable, Dierkx wrote. “For rail executives to capitalize on such change, they need to accelerate investment in new intelligence,” he noted.

Railroads have been investing in that new intelligence, particularly in recent years. For example, Union Pacific Railroad has been connecting wayside hotbox detectors systemwide, creating a single network to determine trend lines and identify bearings before they fail. UP also is developing a proprietary ultrasonic wheel crack detection system to prevent derailments, which in turn drives safety and efficiency.

But all the major freight roads, really, have been investing in remote and real-time monitoring technology to measure rail-car and locomotive health, track condition and component condition; increasingly, short lines and regionals are, too (see page 18). Ditto for passenger railroads and transit agencies.

“The big challenge is the integration of all this,” as CN VP and CIO Serge Leduc told Progressive Railroading in 2013.

Technology providers are more than happy to help on the integration front. They’re well aware of the transformation railroads are going through — they’re going through it, as well.

Last fall, GE launched a marketing campaign to reinforce its position as a “digital industrial company.” As GE Chairman and CEO Jeff Immelt told Minds + Machines attendees last year: “Our CIOs and IT professionals are the biggest drivers of productivity in our company.”

The aim is to help customers drive productivity, too. Introduced in 2012 and field tested in 2013, GE’s Evolution™ Series Tier 4 road locomotive features more than 200 onboard sensors that monitor performance and health, process more than 1 billion instructions per second and provide about 10 gigabytes of data per year. So far, GE has delivered more than 500 Tier 4-compliant locomotives to North American customers.

“The value capture [from these units] so far has been incredible,” says GE’s Miller, who was named president and CEO last September after serving as GE’s SVP and CIO.

Miller cites the company’s Trip Optimizer software as an example of that value capture. Installed on 7,000 locomotives in North America, the software builds an optimal operating plan based on data collected about a train’s characteristics. In 2015, it saved customers $200 million in fuel costs, says Miller.

Predix captures and analyzes the volume, velocity and variety of machine data within a secure cloud environment. The platform soon will be commercially available to customers and other industrial businesses for managing data and applications.

“When you’re talking about massive amounts of data like we are here, there’s only so much you can house onboard a locomotive,” GE’s Miller says.

And we’re talking massive amounts of data. Some of the new-generation track geometry cars with digital video are generating nearly a petabyte of data a year, says Allan Zarembski, research professor and director of the Railroad Engineering and Safety Program in the University of Delaware’s Department of Civil and Environmental Engineering.

A petabyte and counting. In December 2015, a presenter at the university’s second annual “Big Data In Railroad Maintenance Planning” conference in Newark, Del., talked in terms of technology generating brontobytes of data. A petabyte is 1,024 terabytes and a brontobyte is “a million times bigger” than that, says Zarembski, the Big Data conference’s co-chair. “What we’re trying to tackle is the proverbial mountain of data — railroads need to convert the data into usable information to guide their capital maintenance planning programs,” he says. “We also try to highlight the new generation of tools and how they’re used.”

Attendees ranged from railroaders in the engineering, IT, operations and transportation departments; railroad contractors; and suppliers. Representatives from five Class Is and Amtrak also spoke, sharing their respective roads’ “needs” from Big Data.

Zarembski and two of his colleagues presented a case study titled “Using Big Data Techniques to Determine the Relationship Between Rail Defects and Track Geometry Defects.” It featured the results of a Federal Railroad Administration-sponsored project that made use of five years of inspection data from 21,000 miles of track on a major freight railroad and used Big Data analysis techniques. More than 335,000 track geometry defect records and 26,000 rail defect records were analyzed.

The analysis showed that the probability of a rail defect occurring at a location where there were one or more preceding geometry defects was “strong and significant.”

“If I’m a maintenance planner, that’s immediate action,” says Zarembski, who founded railway technical consulting and applied technology company ZETA-TECH Associates Inc. in 1984 and has studied rail inspection data for more than three decades. “This is the kind of usable information we’re talking about.”

Even more valuable information can be gleaned via IoT. In theory, strategists could be able to use Big Data analytics and cognitive computing to predict market shifts like the crude-by-rail traffic boom from a few years back and other energy trends, IBM’s Dierkx suggests. For now, rail execs appear to have their data drawers full integrating the tools they already have.

“If nothing else, we want to be proactive rather than reactive, so we can look ahead and identify where our problems are going to be and plan accordingly,” says Zarembski, adding that the University of Delaware’s Department of Civil and Environmental Engineering plans to host its third annual Big Data conference sometime in December.

“So much of it is what people have talked about for years, but the tools are catching up to us so we can do a much better job of it.”

Freight railroads are elevating efforts to collect, analyze and merge information from many sources