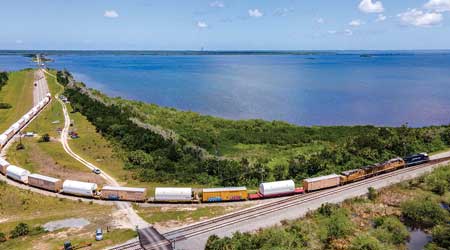 After the Space Shuttle program was retired in 2011, the Kennedy Space Center (KSC) sold off most of the NASA Railroad’s rolling stock, including its three locomotives. The inventory reduction made it unlikely the railroad — which hauled the large solid rocket boosters used in the Shuttle program — would operate again.

That all changed last month, when two solid rocket boosters for NASA’s Space Launch System (SLS) that will help power the first Artemis flight test mission around the moon arrived via train at KSC in Merritt Island, Florida.

On June 5, a train carrying the two boosters — each made up of five, 180-ton booster segments loaded on specially fitted rail cars — departed the Northrop Grumman manufacturing plant in Promontory, Utah, for a 10-day, 2,800-mile trip to Florida’s Space Coast. Then, on June 15, NASA received transfer of the segments at the Jay-Jay Rail Yard in Titusville, Florida.

The same shuttlewagon that once moved the Space Shuttle’s rocket boosters into KSC was used to move the segments — along the same tracks — into the space center’s Rotation, Processing and Surge Facility (RPSF). There, the Exploration Ground Systems (EGS) team will prepare the segments for assembly by offloading them from the rail cars.

They will remain in the RPSF for inspection until it’s time to move them to the Vehicle Assembly Building for stacking on the mobile launcher, NASA officials said in a press release.

The boosters’ journey from Utah marked a milestone for NASA, as the solid rocket boosters are the first elements of the flight hardware to arrive at KSC by train for the Artemis program, NASA officials said. The EGS team expects to receive additional hardware soon, including the launch vehicle service adapter and the rocket’s core stage, they said.

“It’s good to see booster segments rolling into the Kennedy Space Center,” said Mike Bolger, program manager of EGS. “The team can’t wait to get started working on the boosters that will send the SLS rocket and Orion spacecraft on the first Artemis mission to the moon.”

Northrop Grumman has supplied rocket propulsion to NASA since the Apollo program. Artemis I is the first of the Artemis missions that will enable exploration to the moon and Mars. NASA is working toward a test flight launch in 2021 and returning astronauts to the moon’s surface by 2024.

As for the rail system, it has been maintained and available for NASA’s private partners to use since the last locomotive was sold in 2015, said NASA Public Affairs Officer Gregory Harland in an email. Private partners that wish to use the railroad have to arrange for offloading and final delivery to KSC from Jay-Jay or move the cars to KSC for offloading there. 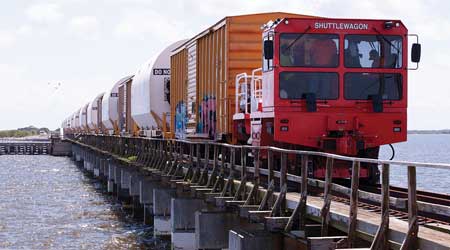 A train transporting the 10 booster segments traveled across the Indian River just outside the Kennedy Space Center. The shuttlewagon is the same one that transported by rail the rocket booster segments used in the Space Shuttle program.
Northrop Grumman

“This will be our standard mode of operation at KSC where we maintain the track and any rail operation is contracted out as needed,” he said.