Railroaders, suppliers, academics, government employees and other industry stakeholders from 14 countries came to Colorado last week to talk rail technology research — and then glimpse some of that technology in action — at the Association of American Railroads' (AAR) 19th Annual Research Review. About 630 people attended the event, which was held April 1-2 and hosted by AAR wholly owned subsidiary Transportation Technology Center Inc. (TTCI).

This year's event theme was "Innovative Technology Developments in North American Railways," and attendees were treated to a healthy dose of said "developments." Day One proceedings were held at the Cheyenne Mountain Resort in Colorado Springs, Colo., marking the first time a portion of the review was held outside of Pueblo, Colo., TTCI's home. 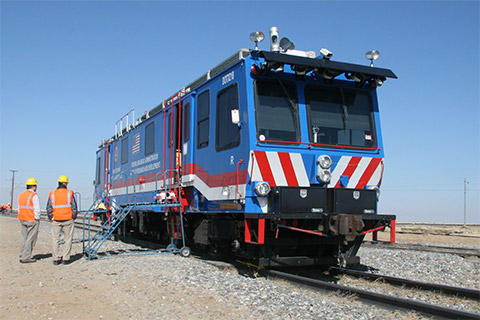 TTCI also unveiled a new review format. The afternoon session featured two concurrent tracks — one focused on mechanical research; the other, track and structures — enabling participants to attend their discipline of choice. In all, the review featured 21 presentations. TTCI President Lisa Stabler noted the changes in her welcome message/opening remarks, encouraging attendees to weigh in on the new format.

Colorado Department of Transportation District Nine Commissioner Les Gruen also welcomed the attendees to the city on behalf of Colorado Springs Mayor Stephen Bach. Gruen discussed the creation of the Division of Transit and Rail, which was formed in 2009 and is responsible for the planning, development, operation and integration of transit and rail into the statewide transportation system.

Delivering the day's keynote as part of the plenary session was Canadian Pacific Vice President of Engineering Brent Laing, who noted that while the railroad industry has made great strides in terms of accident rate reductions, more work needs to be done.

The next safety-improvement step will be driven by employee engagement as well as culture change — and continued investment and implementation of technology, he added.

Next up was TTCI Senior Vice President Semih Kalay, who provided an overview of AAR's strategic research, which includes advanced inspection systems wheel/rail interface and track/equipment technology, and improved car components, such as truck breaks and couplers.

In a Federal Railroad Administration (FRA) research update segment, John Tunna shared information on safety, budgets and 2013 R&D results. The director of the FRA's Office of Research and Development, Tunna reviewed (among other topics) the High Speed Intercity Passenger Rail program in 21 states, noting that 52 construction projects were under way or complete; and 76 planning and design projects were under way or complete.

"By using an infrared detector, we can look for anomalies such as cold or hot wheels, which indicate that brakes are either not working effectively or that they may be sticking," he said.

In the same session, Norfolk Southern Railway's Director of Research and Tests Brad Kerchof talked about his railroad's research on rail canting, including steps that they had taken to minimize excessive cant that could cause a derailment even with good track structure. He added that worn tie plates might cause the rail to cant, which couldn’t be detected by visual inspection.

Other research shared during the session included presentations on cracked wheel detection and inspection, "machine vision" inspection of rail-car components and improved hotbox detection. In the latter session, TTCI Senior Engineer James Cline noted that bearing failures cause 20 percent of all wheel removals annually as well as 37 percent of train accidents. Nine hotbox detector systems are installed on TTCI's 14-mile test track as part of the ongoing research to improve detectors, he said.

While introducing the track-and-structures segment, UP's Connell said that increased volume and shorter work windows have increased wear on rails and switches — and that, in his opinion, all major rail routes eventually will become heavy-axle load (HAL) routes.

Later, TTCI Senior Scientist David Davis reviewed his work on improved tie/fastener designs, noting that new tie installations cost about $1 billion annually. He also said that that gage widening is the second-leading cause of track-related accidents.

During his "Improved Maintenance and Inspection" session introduction, NS's Wheeler told attendees that his railroad was home to 9,950 bridges. In the "Bridge Life Extension and Inspection" segment, TTCI Principal Engineer Duane Otter noted that the replacement value of existing U.S. bridges exceeded $100 billion.

"Deficient bridges require speed and/or weight restrictions," he said. "The scheduling of track time for repairs is difficult ... and in some cases, car-length restrictions must be placed on traffic using these older bridges."

On April 2, attendees headed to TTCI’s headquarters in Pueblo for the annual tour, track walk and demonstrations.

A pre-walk orientation and briefing was conducted in TTCI's passenger services building, which also housed displays and descriptive poster panels detailing some of the center's current work.

Attendees then traversed the High-Tonnage Loop track, which featured 17 "points of interest," including cracked wheel detection, machine vision inspection, various types of rail and a lift frog switch — all of which were discussed during the previous day's presentations. In addition, TTCI staff (and, occasionally, a participating vendor), were on hand to discuss the research and technology, and/or answer questions.

One display that drew considerable attention was the T-18, the FRA's Gage Restraint Measurement System car.  The T-18 uses a fifth-split railroad axle to laterally load the head of both adjacent rails of track to measure rail motion under a combined vertical and later load for the detection of weak ties and fasteners. Track-walk participants toured the inside of the car, with FRA staff onboard to answer questions.