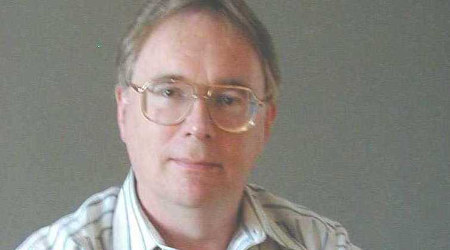 A recent magazine article on whether or not to hump left me fearing for the collective future of our Class I railroads. While creating Precision Scheduled Railroading (PSR) may be trendy at the moment, hump yards were one of railroading’s (relatively few) stellar innovations, right up there with the telegraph, air-brake, self-locking coupler and diesel locomotive. Ripping them out now just cannot be good considering how much they have given us over many decades. What if demand patterns change in the future? Merged railroads have a history of shutting down routes which they are later forced to re-open.

True, too, this is not the first time railroads have exhibited what I call “back-think.” Janney couplers and air brakes were only implemented by force of government order and during World War I, United States Railroad Administration's (USRA) Director General of Railroads William McAdoo actually had to start firing railroad presidents because they refused to accept USRA-pattern locomotives, which — horror of horrors — had bells and whistles mounted in unaccustomed places.

Even after diesel locomotives boosted yard switcher annual utilization from 1,500 to 6,000 hours and hauled gleaming new streamliners past 100 mph, railroad operating men still would not believe that diesels could haul freight. GM had to deploy the four-unit FT and blow away each railroad’s favorite 4-8-4 or 2-8-2 steam locomotive before they got the message.

The Budd Rail Diesel Car was exactly the right product at the right time for branch line service, but they practically had to give it away to induce railroads to adopt it. Nor did resistance to new technology stop with the widespread adoption of diesel power. About the last truly new services launched by railroads were trailers on flat cars (TOFC) in the 1950s and containers on flat cars (COFC) in the late 1960s. Even double-stack container service was not invented by the railroads; rather, they were dragged into it by truckers and ocean shipping lines.

My grandfather and my dad spent their careers in the rail field, so my affection for railroads is inherited, and my own career in IT has included a few years working in rail electronics. I witnessed the railroads paying millions of dollars for the voluminous Advanced Train Control System (ATCS) specification that ultimately proved unimplementable. To the colossal collective embarrassment of the Class I railroads, it became clear that ATCS did not even fully embrace the three codes of operating rules.

While Class I VPs ran for the exits, engineers tried to salvage at least something, resulting in the Locomotive System Integration (LSI) cab display specification plus the use of the ATCS-200 communications specification for CTC code-line replacement and — at first only on Union Pacific — the use of that network with ruggedized laptops to issue set-out and lift orders and to report hours of service.

Now, here we are 20-plus years later with mainline positive train control (PTC) — the bastard offspring of ATCS — still not fully implemented by the Class I railroads. And the many recent Amtrak  accidents won’t boost sympathy on Capitol Hill for any more deadline extensions.

Railroads need to think (much further) outside the box. While most of my earlier rail electronics work focused on locomotive computers and displays, I did have a little freelance fun along the way, inventing something called micro-piggyback (PIGLET) aka Direct Remote Distribution (DRD), wherein you use specially modified box cars for overnight delivery of pairs of pre-loaded route delivery vans from a hub city to smaller cities situated around the hub (or along a corridor) up to 300 miles distant. 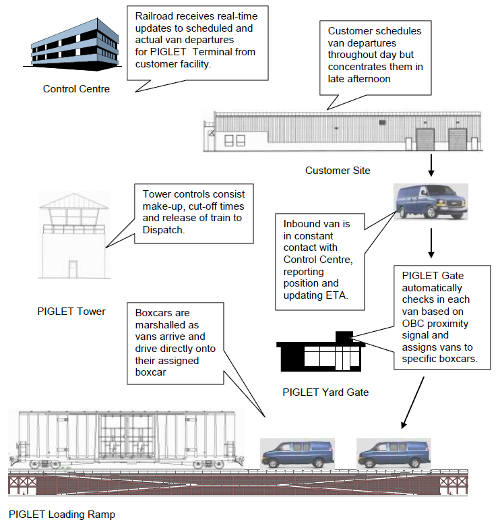 The standard-size vans (such as a Chevy Express or Ford Transit) are then driven off the set-out cut of box cars by their route drivers early in the morning, and returned to the terminal in the evening for overnight backhaul to the hub while the second fleet of vans is outbound. This setup permits shipper customers to run a large distribution center, eliminating local warehouse and trans-ship facilities at satellite or corridor cities, saving millions of dollars. They can also end all intra-company trucking.

Predictably, I was (in some quarters) accused of not being a professional railroader, but ultimately four Class Is did review and comment on my white paper. Their responses fell into three broad categories, as follows:

• this would be a real pain to sell to new customers not using rail now; and

• even if we could sell it, PIGLET would generate too many new high-priority (indeed delay-intolerant) scheduled trains that would plug up our railroad — in other words, it might result in too much new business. This latter comment, made by a Class I VP, left high-tech executives (from a firm I was helping to enter the railroad sector) speechless and groping for comprehension. Indeed, they ultimately decided to stay far away from railroads and focus on heavy truck and bus electronics instead.

Not a professional railroader? Yeah, guilty as charged, but when was the last time a Class I railroad adopted truly new technology and/or processes in order to launch a truly new service? As pointed out above, it was several decades ago. National Lampoon once called Turbo Train (of the mid-1970s) railroading’s answer to the DC-6 (of 1946).

Consider also the fact that during the 1950s and 1960s, while much of their passenger, express and fast-freight business was being blown away, none of their bean-counter-dominated railroads managements ever suggested:

• putting shopping centers aboard trains in order to serve each of seven smaller towns one day per week;

• putting a roving university on a train; or

• running cruise trains on the same model as we run cruise ships.

Rather, they continued to cut costs as revenue declined. And for many Class I railroads, the best way to cut costs was to cease operations entirely.

More important than operating ratios or ROI are service innovation and happy customers. The problem with letting finance be your master is that finance thinks that all industries exist primarily to help finance earn ever-higher rates of return — and there is, in fact, no rate of return which finance considers to be “enough.”

True too, if they can make more money by wrecking your business, then that is what they will do.

Worse still, they hate innovation because it involves risk. Harking back to the Chicago & North Western, perhaps employee ownership for the Class Is would be better because employee-owned railroads would surely put customers first, themselves second and finance in third place. Railroads need to dream of whole new types of service and leverage information technology to prototype them. PIGLET is just one possibility — many more exist. I believe that it is no exaggeration to suggest that their survival depends upon it.

Dan Perley is an information technology consultant and former executive who leads an IT consulting firm based in Long Beach, California. He can be reached at dperley@mtc-stm.ca