Class I execs: Auto-related traffic will continue to be strong in 2017 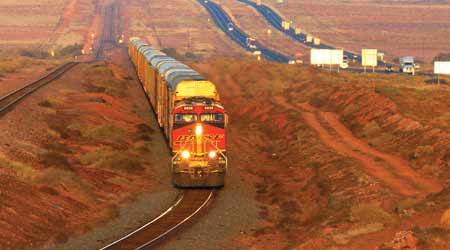 As the auto industry's turmoil reverberated through the economy during the Great Recession in 2008, freight railroads felt the pain through diminished auto traffic.

But by 2010, things started to turn around for the auto industry. And that recovery continued to roll on at least through 2016, when a record 17.5 million new cars and light trucks were sold in the United States.

The industry's comeback over the past six years also has benefited railroads' business of moving finished cars, light trucks and auto parts for their customers, Class I executives say. And automotive remains a strong segment, although this year it may level off in some areas depending on railroads' locations and the automotive plants they serve.

Some of that leveling off has been reflected in the AAR's weekly traffic data reports. Through the first 15 weeks of 2017, all North American railroads reporting to AAR logged 407,051 carloads of motor vehicles and parts, down 3.5 percent compared with volumes during the same period in 2016.

"Obviously, the overall automotive growth has been pretty significant," Fleenor says. "This year is relatively flat [in auto sales] for the industry." 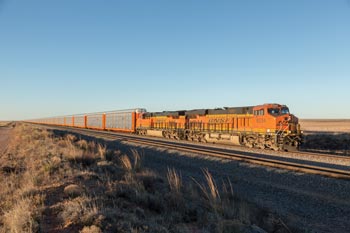 BNSF has added capacity — track and parking areas — to accommodate the growth of its automotive business. BNSF Railway Co.

"The [auto] industry forecasters are predicting approximately the same volume for the next four or five years," he says. "I think there is potential for an upside. If the economy and job situation were to improve from where it is today, I believe that would result in increased sales for our manufacturers."

Also, the decline in gasoline prices starting in 2014 has contributed to growth in the number of small trucks and SUVs being sold. In that year, finished automobiles represented about 50 percent of vehicles sold; this year, they’re on pace to represent about 37 percent. SUVs, small trucks and crossovers are expected to represent the majority of vehicle sales, says Fleenor.

"All the forecasters out there are saying we’re going to see a plateau at 17.5 million vehicles sold for the next couple of years," he says. "Our business, though, is close to growing in the double digits [in carload volume] this year."

In 2016, automotive was BNSF’s fastest-growing segment, he adds.

The automotive industry's post-recession comeback has prompted major railroads to make significant investments to improve their networks and operations to better serve automotive customers by delivering completed vehicles and automotive parts more quickly and without damage, according to AAR. BNSF, for example, has added capacity — track and parking areas — to all of its automotive facilities, Fleenor says.

"We've also added 4,000 rail cars for automotive traffic," he says. "At this point, BNSF has the newest fleet of multilevels in the industry."

In order to improve service, BNSF also is collaborating more with customers and trucking industry partners devoted to finished-vehicle logistics.

"The goal there is to provide transparency throughout the supply chain, which will help our customers understand when their product is going to get to the dealer and, finally, to the consumer," says Fleenor. "Having that transparency will allow us all to do a better job planning and driving inefficiency out of the network."

For example, BNSF has implemented a geo-baying system that helps truckers locate and load an order of finished vehicles more quickly from the Class I's Chicago intermodal facility. The time saved has increased the number of trips per week that trucking firms can make to pick up orders from the intermodal site, which benefits BNSF's customers.

"That results in a significant difference in our service delivery," adds Fleenor.

KCS' outlook for automotive sales remains upbeat. With an increase in production flows from Mexico, the Class I expects 2017 to be strong, KCS spokeswoman Doniele Carlson said in an email. Including those slated to open this year and in 2019, KCS has access to 12 automotive plants in Mexico.

"KCS has expanded its service offering with secure service in and out of the Port of Veracruz," said Carlson. "Our security model has a high degree of success, which we believe to be a competitive advantage."

Other Class Is also noted the impact of automotive on their first-quarter results: CSX and CN registered growth in the segment. CSX reported higher automotive volumes driven by SUV and truck shipments, as North American production increased versus the prior year at several CSX-served plants. CSX’s Q1 revenue rose 9 percent compared with a year ago. However, CSX executives said in a conference call with analysts that auto production appears to be flattening out, and therefore CSX's automotive business likely will be flat for the rest of 2017.

Canadian Pacific, Norfolk Southern Corp. and Union Pacific Corp. all logged decreases in their automotive segments in this year’s first quarter compared with a year ago.

Ferromex ramps up, too

The huge expansion of new auto plants locating in Mexico since the North American Free Trade Agreement (NAFTA) was signed has been a boon to Ferrocarril Mexicano S.A. de C.V. (Ferromex). Since 2009, the railroad has experienced double-digit growth in finished-vehicle moves, which represents about 80 percent of Ferromex’s automotive business. The remaining 20 percent is auto parts moved via intermodal service, says Jose Miguel Baena Galaviz, the railroad’s deputy director of the automotive business. Automotive makes up about 30 percent of Ferromex’s total carloads.

In 2015, the Class I moved 2 million finished vehicles from auto plants in Mexico. About 70 percent of production from the Chrysler, Ford, General Motors, Honda, Mazda, Nissan, Toyota and Volkswagen plants is moved by Ferromex. The company also boasts the largest fleet of autoracks in Mexico; it’s composed of 2,410 bi-levels, 2,358 tri-levels and 235 Automax units.

Ferromex is experiencing an uptick in automotive volume this year over last year, when some auto manufacturers diverted business from rail to truck because of reports of vandalism, Baena Galaviz says.

To address last year's vandalism concerns, Ferromex has increased the number of security personnel who ride on the automotive trains, changed to "priority" times of day that auto trains move on the network and increased train speed, Baena Galaviz says. Additionally, the railroad has been investing in its infrastructure network-wide, including a new bypass in Silao, Guanajuato; double-tracking in other areas; and the installation of lighting and closed-circuit TVs.

"We're also working together with the Army, federal police and with the state governments in Mexico to reinforce the areas where we are running our trains," Baena Galaviz says. The railroad also has encouraged auto manufacturers to contact government and police authorities about their concerns over crime.

The railroad's stepped-up efforts have made a difference, as Ferromex is recovering the lost volume and customer satisfaction scores are improving, Baena Galaviz says.

Compared with previous years, automotive growth this year won't be as high in part because Ferromex experienced a huge bump in traffic when a number of new auto plants — including those built by Honda and Nissan — opened in 2013.

"The industry growth is getting slower because we have been providing rail service to those plants for a while now," says Baena Galaviz.

Looking ahead, Class I executives are paying close attention to President Donald Trump's actions toward trade policies and specifically NAFTA.

During the 2016 campaign, Trump said he would cancel or at least renegotiate NAFTA and impose tariffs or import taxes to discourage auto manufacturers from moving or opening new plants in Mexico. After Trump was elected, Ford Motor Co. announced in January it would cancel plans to build a new, $1.6 billion auto plant in San Luis Potosi, Mexico.

Then in late April, Trump — after speaking with Mexican President Enrique Pena Nieto and Canadian Prime Minister Justin Trudeau — said he wouldn’t withdraw the United States from NAFTA immediately, but would terminate the agreement later if renegotiations don't "reach a fair deal for all."

Regardless, changes in NAFTA could have a significant impact on railroads' automotive traffic.

Also, the six major automakers that produce cars in Mexico for sale in the United States have a global manufacturing base. So, if imports from Mexico into the United States are limited under a new trade policy, the automakers would have alternative locations that could provide other sourcing options outside the United States, CAR noted in a January 2017 briefing.

Although AAR officials declined to comment on the potential consequences on North American railroads' automotive volumes, the association recently assessed the impact international trade has on the freight-rail industry. In a report published in March, the AAR found that at least 42 percent of rail traffic and more than 35 percent of annual rail revenue are directly tied to global trade. Additionally, about 50,000 rail jobs worth more than $5.5 billion in annual wages and benefits depend on international trade.

During KCS' first-quarter earnings conference in mid-April, company executives said that based on customer feedback, they are not planning to retreat from the railroad’s planned investments in Mexico.

"Until we see evidence that our customer investment activity and growth is actively changing, we really have to stay the course," KCS President and CEO Patrick Ottensmeyer said. He and other KCS executives noted that since the Ford announcement, other automakers — including Great Wall Motors Co. Ltd. of China — have looked into filling Ford’s vacated space.

Moreover, additional automakers have new production facilities coming on line in Mexico, including BMW Group, which is building what will become a KCSM-served plant in 2019. Also under construction and slated to launch production in 2019 is Toyota's Guanajuato factory, which will produce Corollas.

And Kia Motors’ new manufacturing facility, located in the Mexican state of Nuevo Leon, opened last year and continues to ramp up production. Kia also is constructing track infrastructure that will allow KCSM to serve the plant directly. At its terminal in Monterrey, the railroad will continue to handle Kia business until completion of the plant’s track infrastructure, which is expected in the second quarter, KCS officials said.

As for concerns over Trump's trade policy views, KCS officials are "confident that the administration has correctly focused on updates and improvements to NAFTA," spokeswoman Carlson said.

Ferromex customers have told the railroad they don’t intend to change their investment plans in Mexico based on Trump's statements, according to Baena Galaviz. And, as the CAR briefing noted, automakers with plants in Mexico have other global locations to ship their products to, which benefits Ferromex.

But should U.S. policymakers move ahead with, say, a 35 percent tariff on autos produced in Mexico — as Trump once suggested — that would affect Ferromex’s automotive volume, about half of which moves into the United States, Baena Galaviz says.

"Every year, we see challenges in terms of volume growth," he says about Ferromex's automotive segment. "It's great to see that new plants are still coming to Mexico and investing here, and we are open to receiving them and giving them service. We are safer, faster and more reliable than ever, and we are ready to keep growing our service levels and volume in Mexico."