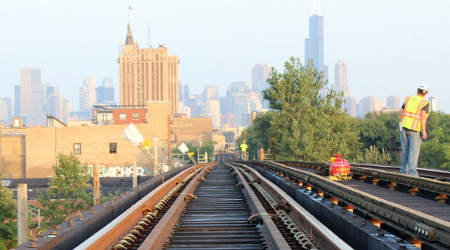 Transit agencies are often asked to do more with less. When Chicago Transit Authority (CTA) leaders sat down to plan their 2018 operating budget, for instance, they faced a $33 million shortfall due to decreased state funding.

To cover the gap, the agency instituted a 25-cent fare increase, which went into effect in January.

Fare hikes have been a common albeit unpopular way to address rising operating costs. To tackle key capital repair projects, Chicago and other cities are exploring a new revenue source: fees charged to ride-hailing services such as Lyft and Uber.

In November 2017, the Chicago City Council approved a plan to tack a new fee on ride-hailing services operating in the city.

The plan calls for a 15-cent hike to an existing 52-cent fee per ride. While fees on ride-hailing services aren’t new — several other U.S. cities have levied similar charges — the Chicago fee was the first in the country to directly support public transit investments, according to the CTA.

The trend is “catching on” in cities and states across the country, says Paul Lewis, vice president of policy and finance at Eno Center for Transportation, a non-partisan thinktank.

Case in point: In late March, New York lawmakers approved a budget that includes a $2.75 upcharge for Uber and Lyft rides in Manhattan. Proceeds will help fund subway repairs.

“Many cities have long had some kind of fee on taxi services, and so this, in some ways, is bringing some kind of parity to that,” Lewis says. “Putting a fee on ride-for-hire vehicles is a relatively simple way of getting at a portion of that needed revenue.”

Proceeds from the fee will fund the $179 million FastTracks program, which calls for repairs on five of the agency’s eight rail lines. The program is aimed at reducing travel time by eliminating a number of “slow zones,” where trains travel at lower speeds due to aging infrastructure.

FastTracks projects are being implemented on sections of the Green, Pink, Red and Brown lines. The work began earlier this year and is expected to continue through 2021.

“Due to the absence of a state capital program and with competition for federal funding increasing, this new source of funding is critical to allow CTA to continue investing in the modernization of its infrastructure,” agency officials said in a November 2017 press release.

And the new revenue stream is enabling CTA to boost its security efforts, too. In late February, the agency unveiled a separate $33 million program that calls for upgrading 3,800 older-model security cameras throughout its system.

In addition, the so-called “Safe and Secure” program will provide funds to install new lighting, perform repairs and make other safety improvements at CTA’s 146 rail stations. The agency also is adding video monitors at all rail stations to improve monitoring.

Even as CTA works to get the most bang for its ride-hailing buck, the new fees won’t necessarily address all funding shortfalls.

“It’s certainly not something I’d want to put all my chips on,” says Eno Center’s Lewis. “We have to do a better job funding our public transit systems for both operations and maintenance.”

For now, the new ride-hailing fees demonstrate the concept of “shared responsibilities” among transit agencies and other transportation providers, says Darnell Grisby, director of development and research at the American Public Transportation Association.

“It is not an antagonistic relationship,” he says. “All of us are trying different things to try to serve the passenger better.”