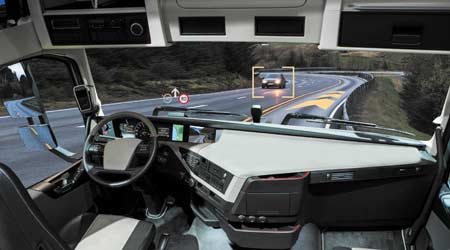 In September 2017, the U.S. Department of Transportation (USDOT) and the National Highway Traffic Safety Administration issued a new federal guidance for automated vehicle technology, with an emphasis on safety benefits and public education.

“In the transportation sector, where nine out of 10 serious roadway crashes occur due to human behavior, automated vehicle technologies possess the potential to save thousands of lives, as well as reduce congestion, enhance mobility and improve productivity,” the agencies noted in the introduction of “Automated Driving Systems: A Vision for Safety 2.0.”

An estimated 10 million passenger vehicles with at least some self-driving features — automatic braking and lane departure warning systems, for example — are expected to be on the world’s roads by 2020, according to Business Insider.

Autonomous trucks are coming, too. There are trucks on the road that already operate between Level 2 and Level 3 on the Society of Automotive Engineers’ six-level automation scale, meaning the tractors feature such automated functions as acceleration and steering. Drivers, however, must remain engaged and ready to take control at any time.

“Surface transportation is going to undergo more disruptive, significant changes in the next 10 years than the last 50,” says Steve Sashihara, co-founder and chief executive officer of Princeton Consultants Inc., which uses advanced analytics and data science to help transportation companies improve service and efficiency. “I think there will be people alive in 2030 who will not remember a time when there were not self-driving trucks.”

Others estimate that point in history won’t arrive until closer to 2050. Regardless, change is coming, they say.

What’s driving the push for autonomous trucks? And what could self-driving trucks mean for rail?

Answers to the first question include the expectation of reduced labor costs, quicker delivery times and fuel efficiency, Sashihara says. But a number of factors will impact how quickly self-driving trucks flood the nation’s highways. Chief among them is regulatory clarity regarding liability and hours of service, as well as legislative action to safely deploy emerging automated driving system technology.

Truck carriers also must see a clear business case for making the transition, and the driving public needs to feel comfortable sharing the road with 80,000-pound commercial trucks that have no one onboard.

As for the impact all of this might have on rail? For starters, new approaches to digitization, operational transparency and customer service will be required, says Linda Bauer Darr, president of the American Short Line and Regional Railroad Association (ASLRRA).

“Autonomous trucks for our industry are not a threat — they’re more of a challenge for us,” she says.

Or perhaps even a “significant opportunity,” as Eric Starks puts it.

“While [railroads] have embraced technology and data information, this allows them to go to the next level,” says Starks, chairman and CEO of FTR, which provides forecasting and analysis of North American freight transportation and equipment demand. “And I think the evolution of autonomous vehicles continues to spur that dialogue and ingenuity within the system.”

There’s certainly been dialogue about the technology within the short-line set. This past year, ASLRRA began taking strategic steps to address the impact of driverless trucks.

“We are all trying to get our heads around what this technology means, what it costs, what the policies are, what the infrastructure would be to support it,” Darr says. “But we know how to compete in a very competitive market, and we’re investing in our own technology and improvements that are going to keep us in the game and keep us strong.”

In 2017, ASLRRA led a pilot program involving two short lines, a Class I and a shipper; Darr declined to name the participants. The railroads are experimenting with providing real-time delivery (and delay) data to the shipper via a shared digital tracking platform. The idea: Each entity will monitor the freight moving in real time through the network.

“If that works, we want to use that technology throughout our industry, so that the customer service we’re already known for becomes even stronger,” Darr says.

Positive train control (PTC) and the underlying technologies required to support it form “a good basis for supporting future developments” railroads will need in order to compete with the autonomous technology evolution, said Nick Chodorow, chief information officer for the Belt Railway Co. of Chicago and chair of ASLRRA’s Technology Committee, in an email.

“It isn’t just the truck industry that is investing in automation — it is also the waterborne shipping industry (barges and ocean-going freighters),” he said. “Railroads need to be a data-rich partner in the supply-chain ecosystem, and the underlying technology and data created by this technology enable this to occur.”

Rail could have “a leg up” on other transport modes, given the communication backbone requirements to run PTC, said Chodorow, who finds it “hard to believe how automated trucks will actually work in a scaled environment with non-automated cars, pedestrians and all the other issues that come with a non-fixed right of way.”

‘It will be a slow progression’

In the meantime, the rail industry should focus on partnering with groups such as technology incubators and the higher-education sector to work on ways to improve the efficiency, cost and safety of shipping via rail, he said.

“You see this occurring with some of the Class I railroads such as Union Pacific, which recently signed a tech accelerator, Plug and Play,” Chodorow said. “This needs to occur in the non-Class I world, too.”

Class Is certainly “support innovation within our own industry and across other modes of transportation,” said Association of American Railroads (AAR) spokeswoman Jessica Kahanek in an email, noting that railroads have implemented a variety of automated inspection technologies and advanced software systems that have boosted safety and increased operating efficiency.

The industry also “is on track to meet all installation requirements related to [PTC], which will reduce human error — similar to the expected benefits of autonomous vehicles,” Kahanek said.

Regulatory changes still would be needed before autonomous trucks become the norm. And as the changes take shape, rail advocates would like to obtain what ASLRRA’s Darr calls “evenhandedness in policy.”

“The irony is that the federal government is investing in autonomous vehicle technology in a very significant way, while at the same time we’ve spent the past year arguing against a policy the government wanted to put in place that would require our industry to have two-man crews,” she says. “This is an example of where the government is treating railroads far differently than our trucking competitors.”

“Just as freight railroads believe users of infrastructure should be required to pay for the maintenance of that infrastructure, we believe industries should also foot the bill for what it takes to safely move these technologies from research to application in the real world,” Kahanek said. “This includes technologies to make infrastructure connectivity capable of facilitating autonomous cars and trucks. The financial responsibility for making autonomous trucks must not belong to the taxpayers.”

Hashing it all out will take time, which is why some observers view the 2030-to-2050 timeframe as potential benchmark years for autonomous trucking.

“It will be a slow progression,” FTR’s Starks says. “But I do think as the railroads pay attention to what is happening in other parts of the transportation system, they’re getting excited, and they’re thinking out of the box.”

Those that aren’t will get left behind, Princeton Consultants’ Sashihara says.

“Railroads are large corporations with access to capital and very sophisticated technology departments,” he says. “They’ve got to bring their ‘A’ game, because the next 10 years are going to decide whether the next generation of Class Is dominate like they [have in the past] or whether they lose market share to new trucking companies.”

And bringing their respective “A” games could lead to something of a vocabulary rethink.