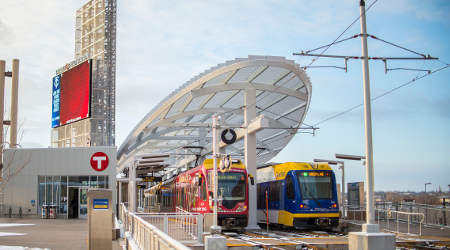 At least $6.8 billion worth of new development projects have sprung up along Minneapolis' light-rail routes and proposed extensions, the Twin Cities' Metropolitan Council announced yesterday.

The investments include new construction — such as the headquarters for UnitedHealth Group Inc. subsidiary Optum in Eden Prairie, Minn. — as well as redevelopment and rehabilitation of existing buildings, Met Council officials said in a press release.

Council staff calculated the total by compiling data reported by developers about recently completed projects, as well as ones planned or under construction.

The lion's share of the development occurred along the Green Line, where $5.1 billion worth of projects have sprouted up, marking an increase from $4.2 billion in spring 2016. Half of that growth has occurred outside downtown Minneapolis, according to the council.

The proposed Green Line Extension, also known as the Southwest light-rail transit project, has netted more than $515 million in projects near its alignment. Construction on the extension is slated to begin this year, with the line opening in 2021.

Development along the Blue Line — the area's first light-rail line — is valued at $699 million for 15 of the 33 projects along its route, Met Council officials said.