TTCI: Taking rail inspection to the next level 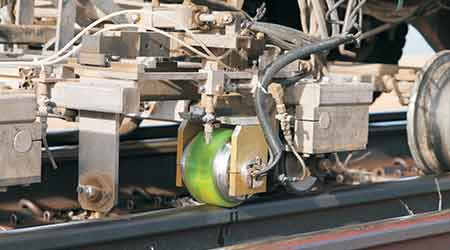 While freight and passenger railroads keep trying to expand their technological horizons, the Transportation Technology Center Inc. (TTCI) continues to work on a project that holds innovation promise for both.

For the past four years, the center — a wholly owned Association of American Railroads subsidiary — has been developing a rail inspection system that would employ multidimensional phased array ultrasonic technology (PAUT) to detect rail defects before they cause a track failure and derailment. The PAUT system is designed to identify transverse defects under shells, and weld and rail web defects that often are difficult to detect using conventional ultrasonic detection techniques.

The patented prototype system TTCI developed in late 2015 — in partnership with engineering and technology firm EWI — is based on a conventional rail inspection platform using roller search units that run atop the railhead. The system employs an ultrasonic array featuring 429 elements packed together in the same roller unit. An inspection beam can be directed at an intended target area more consistently and precisely, decreasing the chances of missed defects.

“You end up with 429 elements that can scan rail versus six or eight in a conventional system. So, you can scan a particular area and more broadly cover a rail,” says Matthew Witte, a TTCI scientist who heads the PAUT system project. “You also gain the redundant examination of a large volume of rail and web.”

TTCI so far has operated the prototype at lower speeds, but the system’s goal is to scan rail at up to 20 mph as requested by the rail industry, he says. The project’s research and development phase is expected to conclude by year’s end.

After TTCI demonstrates that the technology can work in a production environment, the center plans to turn over the PAUT system to companies interested in producing and marketing it on a nonexclusive, royalty-free basis. TTCI then would provide technical assistance to those vendors.

“Our role is to conduct the research and assist organizations to full production,” says TTCI President Lisa Stabler. “There are several organizations that are interested in bringing it to market and production in North America.”

Other promising R&D is underway at TTCI, as well. The center is researching a cracked wheel detection system designed to better locate defects in wheels, says Stabler.

In addition, TTCI and several suppliers are in the early research stages on fiber optics that could be used to sense vibrations near track. Many fiber-optic cables already are in place along railroad rights of way for communications and other purposes, says Stabler.

“An acoustic sensor would hear things going on and would potentially sense things like flat wheels, broken rails, rockslides and mudslides,” she says.