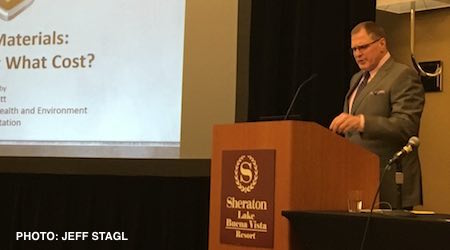 CSX's Skip Elliott described a soon–to–be–launched Web app that will list the hazardous materials the Class I moves in a certain state.

Held Feb. 9 and 10 in Orlando, Fla., the event attracted more than 100 representatives from a cross-section of the industry, including Class Is, short lines, transit and government agencies, suppliers and service providers.

Sessions on the Transportation Security Administration’s (TSA) national strategy, the current and future applications of unmanned aerial vehicles, and policing and securing railroads in Los Angeles drew some of the largest crowds.

During his lead-off presentation Feb. 9 on the TSA’s national strategy for surface transportation security, Manager of Freight Rail Security Scott Gorton described how the administration is striving to safeguard the free movement of people and goods. Improvised explosive device attacks are the most likely threat to surface modes, while public transportation systems are more susceptible to attacks involving standoff weapons, small arms or biological agents, said Gorton.

How much is too much?

Later that morning, CSX Vice President of Public Safety, Health and Environment Skip Elliott said the Class I planned to launch a Web application early in the second quarter that would enable the public to learn which hazardous materials the railroad was moving through a particular state. However, there is an increased risk to homeland security if a railroad provides the general public too many details about haz-mat movements, he said.

In the afternoon, the event closed with a presentation on the DHS’ human trafficking awareness program — the Blue Campaign — that the agency has partnered with Amtrak, among others, to disseminate. Scott Santoro, the senior training adviser for DHS’ Federal Law Enforcement Training Center, described how human trafficking differs from human smuggling. Sex or labor trafficking involves a crime against a person via involuntary exploitation, he said.