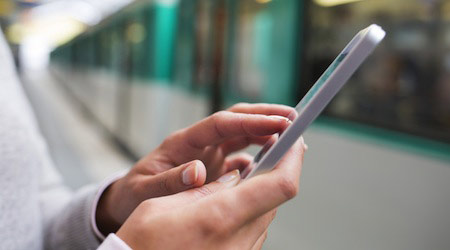 Wherever they happen to be, shippers, passengers and others who regularly rely on rail increasingly want instant access to information and services, industry executives say.

To address the growing demand, freight and passenger railroads are offering a variety of mobile apps that allow customers to use smartphones to perform everything from checking the status of their shipments to accessing real-time arrival and departure data.

The move toward mobile goes hand-in-hand with changing workforce demographics, as tech-savvy millennials replace longtime railroaders. The mere prevalence of smartphones likely plays a role, too: Currently, more than 60 percent of U.S. adults own such a device, according to estimates from the Pew Research Center.

Freight railroads are paying attention to those changes. CSX Transportation, for example, made its foray into mobile in 2011. That year, the railroad debuted an app version of its ShipCSX desktop platform, which allows customers to track shipments, make payments and perform a slew of other tasks.

On the app, customers can pull specific information about equipment used to haul their loads, including car types, dimensions and weights. If any issues crop up during transport, customers can use the app’s shipment problem resolution tool to create an inquiry that’s routed directly to customer service.

"All of our customers want flexibility for when they’re not in the office," Jenkins says.

As of early May, more than 40,000 customers were utilizing the ShipCSX system, according to CSX spokeswoman Kaitlyn Barrett. The majority of those users access the platform through their desktop computers, but that likely will change in the future.

Customer feedback on the app indicates they would like more of the platform’s tools to go mobile, says Eddie Chesser, CSX’s director of ebusiness.

"It is consistent with the direction our customers are heading in integrating mobile apps into their own companies," he adds.

Simply developing an app is not enough to ensure widespread usage, of course. To help customers learn the ins and outs of the entire platform, CSX launched the "Get to Know ShipCSX" campaign this spring.

"We need to make sure we’re out in front educating them," Jenkins says.

CN premiered a similar shipment tracking app for Apple devices in 2012. The app allows customers to use CN’s "QuickTrace" tool to pull real-time shipping information, such as car and container numbers, as well as a shipment’s current location on a map.

Sometime next year, CN plans to release an app for its "iAdvise" program, which is aimed at helping customers plot first- and last-mile strategy for their shipments. The software provides automatic notifications of any delays or problems, along with a host of other pertinent information for the beginning and ending legs of a journey.

"It becomes an aggregate of information that [customers] can actually use for planning," says Murray.

Certain pieces of customer data — such as invoices and demurrage information — don’t lend themselves as easily to mobile technology, which is why CN has not rushed to optimize everything for an app, Murray says. Extensive beta testing has helped the Class I determine what customers want and need on an app.

"It’s not the technology that’s going to drive what we move to mobile. It’s really the type of information and how the customers want to consume it," says Murray.

Mobile app development is prevalent in the passenger-rail sector, too.

In September 2013, the Tri-County Metropolitan Transportation District of Oregon (TriMet) introduced a mobile ticketing app for rail and bus routes. It was the first app of its kind in the United States, TriMet officials said at the time.

TriMet’s staff partnered with GlobeSherpa to produce the app, which came at no cost to the agency, although GlobeSherpa earns 5 percent of the cost of each ticket, says TriMet spokeswoman Roberta Altstadt. That money goes toward software support.

Aside from providing convenience for TriMet riders, mobile tickets also reduce wear and tear on the agency’s ticketing machines.

"That’s important to us because it’s difficult and costly to maintain the equipment," says Chris Tucker, TriMet’s director of revenue operations.

And the more customers use the app, the fewer coins there are in TriMet’s fare boxes, which means less time invested in transporting the heavy currency. In the past 18 months, TriMet has experienced a 10 percent decrease in the amount of coins systemwide, Tucker says.

TriMet uses a "flash pass" form of authentication for entry onto its vehicles, meaning riders need not pass through a turnstile before boarding. Rail or bus operators simply visually confirm tickets prior to boarding.

To ensure that riders aren’t using a screen grab of a ticket, TriMet’s app features a series of animations and interactive features. If any questions about authenticity remain after a visual confirmation, onboard staff members can use their own smartphones to scan a Quick Response (QR) Code on the ticket.

Since its launch, there have been about 200,000 downloads of the app, which in late 2014 earned first place in the American Public Transportation Association’s AdWheel competition for marketing and communication efforts.

"We get more people using the app and even fewer people needing any assistance," says Tucker.

TriMet riders purchased 2 million tickets in the app’s first year. The total number of tickets has since bumped up to 4 million, Tucker says.

DART’s app has resulted in many of the same benefits, including a reduction in coin and cash in the system, as well as decreased equipment maintenance costs, says David Leininger, DART’s chief financial officer and executive vice president of finance. But it also has helped save money on promotional campaigns or partnerships with outside organizations and businesses. App-based promotions and deals mean less is spent on printing and distribution costs.

"It just opens up a whole level of flexibility that physical media doesn’t provide," Leininger says.

In late 2014, the agency ran a promotion with the Texas State Fair that allowed riders to purchase discounted tickets on the app.

"[GoPass] allows us to have a captured audience," says Nevin Grinnell, DART’s chief marketing officer and vice president of marketing and communication.

In mid-April, the agency announced a new direction for the app: a partnership with car-hailing service Uber. On the app’s "events and offers page," passengers can now access Uber’s services to help them reach their final destinations.

As with TriMet, DART faced a challenge in implementing an intuitive, user-friendly app. Getting to that point required extensive beta testing with customers.

In initial surveys, DART customers felt too many steps were involved with purchasing mobile tickets. Developers used that feedback to find the best way to streamline the process.

Meanwhile, GlobeSherpa is working with other U.S. transit agencies — including the San Francisco Municipal Transportation Agency, Virginia Railway Express (VRE) and Valley Metro in Phoenix — to develop apps of their own, says spokesman Mac Brown.

Transit agencies can use GlobeSherpa’s Transaction and Operations Management System to gather real-time information about ticket sales, as well as other relevant data. They can view where and when tickets are purchased using the system’s geo-analytics platform.

"It’s all about the data and the money," Brown says.

GlobeSherpa worked to tailor apps based on a transit agency’s specific goals, customer base and modes of transport, says Brown. Some, like Valley Metro, opted not to include mobile ticketing immediately.

For VRE, working with GlobeSherpa on a mobile app was the next logical step in updating the railroad’s 13-year-old legacy fare collection system, says Chris Henry, director of rail operations at the commuter railroad.

"When we started the process, we found that mobile was kind of the next up-and-coming technology that looked like it had promise in an application for commuter rail," he says.

VRE’s new app, which debuted May 15, served another purpose for the commuter line: a smoother integration with the nearby Washington Metropolitan Area Transit Authority (WMATA).

Participants of WMATA’s SmartBenefits program, which allows District of Columbia-area employers to load money directly onto a transit card, can utilize the cards to purchase VRE tickets on the app. SmartBenefits users then can store card information on VRE’s app for future ticket purchases.

In the future, VRE plans to use the app to simplify fare payments for riders who utilize other regional transit systems, such as the Fairfax Connector bus routes.

But, despite the rapid advancement of mobile technology, GlobeSherpa’s Brown emphasizes that the apps ultimately serve as a complement to paper tickets — at least for now.

"We don’t look at mobile as a replacement for all their fare collection systems," he says. "Maybe someday it will be, but not today. It’s just another channel riders can use to purchase and use tickets."

Email comments or questions to daniel.niepow@tradepress.com