Everything about InnoTrans 2014 was bigger. The massive, every-other-year international event for transport technology filled 27 exhibit halls at Germany’s Berlin ExpoCenter City from Sept. 23 to 26, with a 10 percent increase in both exhibitors and attendees. All told, a record 2,758 exhibitors from 55 countries and 138,872 visitors from more than 100 countries attended. Additionally, 145 new rail vehicles were featured in an outdoor display area and on 2.5 miles of track, while 140 products made their international debut inside.

Although the percentages of North American exhibitors and attendees remain in the single digits, InnoTrans officials were pleased with the increased participation from companies that hail from the continent.

“Manufacturers of rail technology from the USA have been represented at InnoTrans since 1998, when four companies came to Berlin,” says Kerstin Schulz, exhibition director of InnoTrans. “With each trade show, the number of U.S. exhibitors has continued to grow, but this year they increased dramatically.” 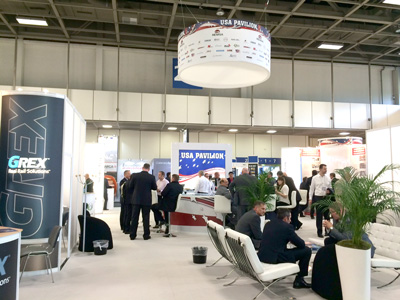 Compared with InnoTrans 2012, the number of U.S. exhibitors jumped by more than 70 percent to 67 — including 14 companies that were part of the USA Pavilion, sponsored by the Railway Engineering-Maintenance Suppliers Association (REMSA) and the Railway Supply Institute.

“We offer space in the pavilion as a benefit for our member companies,” says Urszula Soucie, REMSA’s director of trade shows and operations, adding that the number of pavilion exhibitors nearly doubled from the space’s debut in 2012. “It’s a turnkey service that includes translators, catering, booth construction and greeting space. Otherwise, you can get lost in the mix at a show that large.”

Among the largest of the U.S. exhibitors, GE Transportation used InnoTrans 2014 to launch RailConnect 360, a connected suite of customizable software solutions that provide data-driven solutions to meet the industry's challenges.

“You learn something every time you get in front of a customer,” says Kirk Knauff, operations and products leader for global services and solutions at GE Transportation, which took a crew of about 70 employees to Berlin. “This event was no different. We got a lot out of it, and it confirmed that customers have the same problems all over the world, whether it be network capacity, yard optimization, asset management or operational challenges.”

Five InnoTrans forums provided opportunities for discussion on railway engineering certification and financing for mass-transit systems. At a Rail Leaders' Summit, Germany's Federal Minister of Transport and Digital Infrastructure Alexander Dobrindt noted that "the intelligent application of digitalization could enable the railways to become the mode of transport for the future," according to an InnoTrans press release. Meanwhile, participants also talked about design and mobility issues at an International Design Forum; the need for maintenance of European railway tunnels, some of which are up to 150 years old, at an International Tunnel Forum; and the importance of digital real-time information at a Public Transport Forum.

“Due to the size of the show and the range of countries it represents, we were able to make connections with existing partners as well as interview possible future partners in order to branch our product globally,” adds Teresa Lazenby, marketing director for first-time InnoTrans exhibitor AIC Rail, also a USA Pavilion company.

That’s a story Soucie hears often from North American firms participating at InnoTrans. After all, she says, it’s the place to be for companies either with a stake in the global rail industry or looking for overseas partners or reps.

“This is the ideal venue for defining one’s own market position, for introducing new products and for accessing new markets,” InnoTrans’ Schulz says. “During its four days, this trade show brings together the highest concentration of supply and demand from the worldwide rail market. This means that exhibitors and visitors obtain a complete overview of the entire range of rail industry products.”