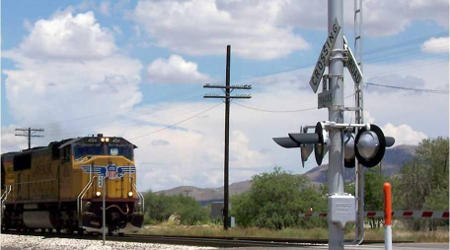 As of March 31, the Class I had prepared eight additional track segments for PTC operations in the quarter, boosting the total number of segments to 176, or 97 percent completion.

"These track segments are equipped with wayside devices such as signals, switches and radios and have defined GPS coordinates, which identify thousands of precise locations for systemwide PTC coordination," UP officials said in a press release.

Through March 31, the Class I also had trained 3,300 additional employees on PTC operations and installed its system on another 900 route miles, increasing the total number of route miles in PTC operation to 10,899, or 64 percent completion. Now, about 22,690 workers are trained on PTC, or 88 percent of those who need such training.

"Training materials are tailored to a variety of employee roles, including engineer, conductor, dispatcher, maintenance of way/engineering, mechanical, signal, telecom and information technologies," UP officials said.

The railroad expects to continue implementing, testing and refining its PTC system in 2019 and 2020. The Class I's PTC footprint is the largest among all North American railroads, encompassing more than 17,000 route miles — roughly one-third of all PTC miles and 45 percent more than the next largest railroad, UP officials said.