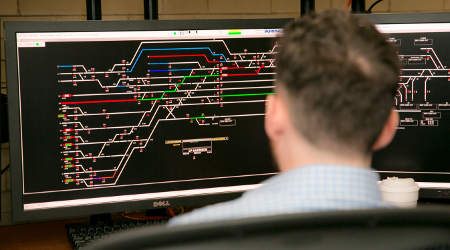 The funding marks the second round of grants under the fiscal-year 2018 Consolidated Appropriations Act and the Consolidated Rail Infrastructure and Safety Improvements (CRISI) Program, which was allocated $250 million for PTC implementation. The CRISI Program was authorized by the Fixing America's Surface Transportation Act that provides funding to improve the safety, efficiency and reliability of passenger- and freight-rail systems.

In August, the FRA announced $203.7 million in PTC grants for 28 projects. All the grants in the second round will benefit passenger rail, with about 31 percent — or $14 million — helping rural projects, FRA officials said in a press release.

"These grants not only help railroads continue to make progress implementing positive train control, but they also show that we're steadfast in our commitment to make investments in passenger rail and rural communities," said FRA Administrator Ronald Batory.

The current awards will fund many aspects of PTC implementation, including back office systems; wayside, communications and onboard equipment; personnel training; system testing; and interoperability.