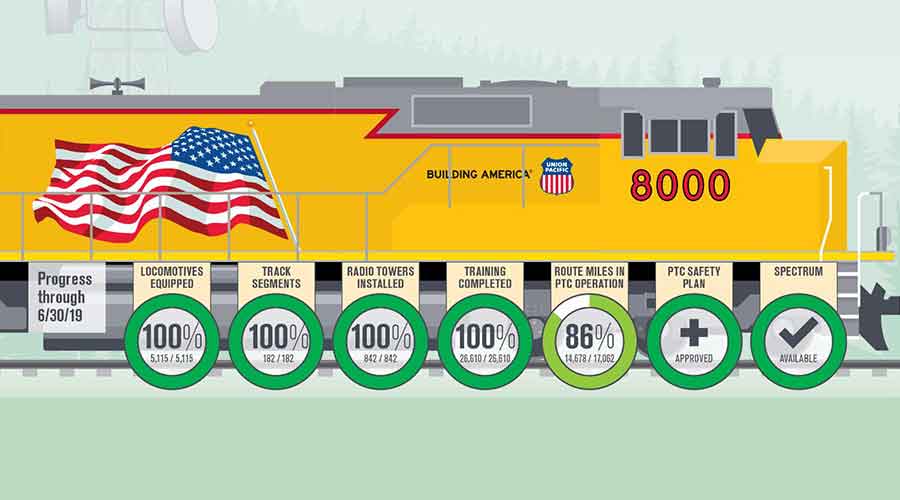 The 42 railroads that are subject to the statutory positive train control (PTC) mandate continued to make steady progress with implementation in the second quarter, the Federal Railroad Administration (FRA) announced yesterday.

Based on the railroads' Q2 progress reports, PTC systems were in operation on about 50,300 of the nearly 58,000 route miles required to be equipped with the technology, a 4 percent increase in route miles since Q1, FRA officials said in a press release. Class Is reported that PTC systems were in operation on about 91 percent of required mainlines as of June 30, also a 4 percent increase since Q1.

Despite the progress, railroads must still complete significant work to fully implement their PTC systems by Dec. 31, 2020, especially activating systems on the remaining required mainlines and achieving the necessary interoperability with other railroads, they said. The FRA is directing its attention and resources on the technical challenges facing the railroads, including commencing revenue service demonstrations, interoperability testing and safety plans

In addition, the FRA is holding regular meetings with Amtrak and commuter railroads that operate on or near the Northeast Corridor and in the Northeast. The FRA also plans to host the remaining four of six PTC collaboration sessions over the next 16 months to share best practices and jointly resolve common technical problems.