The Association of American Railroads (AAR) has launched a countdown clock on its homepage to demonstrate how much time Congress has to decide whether to extend the Dec. 31 deadline for railroads to implement positive train control (PTC) technology.

Today, the clock reads 24 days until railroads and their customers will have to begin making contingency plans for service as of January 2016. Most railroads will not have their PTC systems fully implemented by the current Dec. 31 deadline; many have said they will cease service as of Jan. 1 in order to avoid federal fines for operating in violation of the PTC requirement. 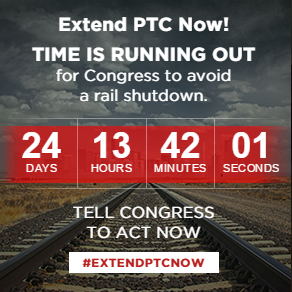 Congress passed a railroad safety law in 2008 that required railroads to install the crash-prevention technology by the end of 2015. Late last week, the House Committee on Transportation and Infrastructure introduced a bipartisan bill that would extend the PTC deadline until 2018, with extensions beyond that under certain circumstances.

Railroads have warned for years that the 2015 deadline would be impossible to meet.

"Railroads have spent nearly $6 billion and hired thousands of workers to install this set of highly advanced technologies, but without congressional action, railroads will have little choice but to shut down or severely limit rail traffic," AAR stated in a post on its website.

"Train systems cannot be shut down or restarted overnight, so freight railroads, passenger rail providers and shippers are being forced to make decisions now to prepare for the severe disruptions in rail service that will occur if Congress does not act soon on a PTC extension," the post stated.