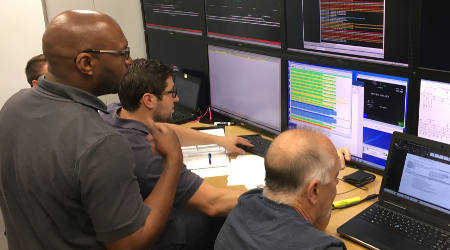 As of Sept. 30, 24 railroads had installed all of their system hardware, 11 others had installed between 95 percent and 99 percent of the required hardware, and all impacted railroads had acquired sufficient radio spectrum, FRA officials said in a press release. In addition, Q3 data shows only five “at-risk” railroads, down 67 percent from the 15 at 2017’s end and 44 percent from the nine at second quarter’s end, they said.

The FRA considers any railroad that has installed less than 95 percent of system hardware to be at risk of not meeting either the federally mandated deadline of Dec. 31, or the statutory criteria necessary to qualify for an extension to 2020’s end. Hardware installation is one of six statutory criteria required to obtain an alternative implementation schedule.

The five at-risk railroads as of Sept. 30 were Amtrak, the Capital Metropolitan Transportation Authority, Altamont Corridor Express, New Jersey Transit and Peninsula Corridor Joint Powers Board (Caltrain). They collectively own or control about 1,302 of the 58,000 route miles subject to the PTC mandate, according to the FRA.

“The progress made over the last year is a testament to what can be accomplished with proper focus and attention,” said FRA Administrator Ronald Batory. “We encourage any railroads seeking an alternative schedule to submit their formal requests in a timely fashion.”