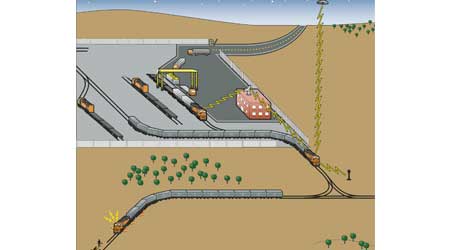 Source: U.S. Government Accountability Office.
An illustration shows the Interoperable Electronic Train Management System, which can transmit information — such as speed restrictions — and movement authorities as a train departs, then continuously calculate a safe braking curve as a train travels along a route.

With the positive train control (PTC) implementation deadline looming, a lot of angst was brewing last month among Class I and commuter railroad executives, rail organization leaders and shippers.

The anxiety stemmed from the potential implications of freight and commuter railroads failing to meet the mandated Dec. 31 deadline — and it’s abundantly clear most of them won’t. Many railroads have been analyzing the liability, federal penalty and contractual consequences of failing to comply with the PTC stipulations of the Rail Safety Improvement Act of 2008, and have concluded they might need to suspend or reduce certain services beginning Jan. 1, 2016.

For example, several Class Is are proposing to stop hauling certain hazardous materials and discontinue operating or hosting commuter-rail services on lines requiring PTC, while some commuter railroads are suggesting they’ll need to shut down their systems. Such service disruptions could delay freight en route, divert large volumes of cargo to highways — causing additional traffic congestion and road damage — and inconvenience commuters.

The best way to avoid those scenarios, in the heavy opinion of rail industry constituents? A deadline extension granted by Congress.

Rigorous testing, proper employee training and the Federal Railroad Administration’s (FRA) certification of all PTC system components to ensure functionality and interoperability will take considerable time, said Executive Vice President and Chief Financial Officer Luc Jobin in CN’s letter. PTC deployment has been slowed by significant delays in the development of several key technologies and components, as well as in radio tower permitting processes, he said.

Recently released reports from the U.S. Government Accountability Office (GAO) and FRA acknowledge that most railroads won’t meet the deadline. Issued in early August, the FRA report stated that the agency only had received three of the 38 required safety plans necessary to evaluate and certify a PTC system; issued in mid-September, the GAO report found that most U.S. roads would need one to five more years to complete all necessary work.

AAR: An achievable deadline is key

The current deadline is “arbitrary, unworkable and unrealistic,” as AAR officials put it. They believe December 2018 would be a more achievable target for full implementation, plus an additional two years for nationwide testing.

In mid-September, AAR President and CEO Ed Hamberger alerted more than 40 U.S. trade associations about the potential for service shutdowns and major rail disruptions if Congress doesn’t extend the deadline by October’s end.

“Railroads are beginning to notify their customers of the possibility of an impending shutdown as they, too, have to prepare for such a worst-case scenario. Congress can’t wait until November or December when the clock is about to run out,” Hamberger said in a statement.

APTA officials agree that the deadline needs to be addressed now.

“This action is crucial to avoid the disruption of millions of Americans who rely daily on commuter-rail service as they commute to and from work,” said APTA President and CEO Michael Melaniphy in a statement.

An extension also is supported by rail labor unions and rail shipper groups, such as the National Industrial Transportation League and Freight Rail Customers Alliance.

In their letters to Thune, other Class I and transit agency leaders provided implementation updates and cited possible consequences for missing the deadline.

Union Pacific Railroad President and CEO Lance Fritz said an embargo notice on toxic-by-inhalation (TIH) materials would be issued prior to Thanksgiving and commuter operations on UP’s lines would cease before midnight on Dec. 31 if the deadline isn’t extended. Long-distance passenger trains would stop originating several days earlier.

“UP carries 27,000 carloads of TIH traffic a year, [and] if this commodity were to still move in commerce, it would need to be carried by about 100,000 trucks,” Fritz wrote. “Moreover, people who currently use commuter trains would be forced onto the highways, creating an even more congested mixture in some of our country’s most dense urban environments.”

BNSF Railway Co. President and CEO Carl Ice also cited “enormous congestion” that could result by re-routing traffic from PTC-impacted lines — which are maintained to handle high-density volumes — to low-density lines. The Class I might not be able to provide all existing services to various commuter-rail agencies and Amtrak, he wrote.

If operations halt on lines requiring PTC, “our entire network will likely be compromised by congestion and effectively shut down,” Ice said.

BNSF expects to implement a significant portion of its PTC system by Dec. 31, then continue installation work and extensive testing.

CSX Corp. so far has partially equipped more than 2,700 locomotives, but the earliest time frame that locomotive hardware installations can be completed is 2018, wrote Chairman and CEO Michael Ward. The railroad also has put in place more than 2,500 wayside interface units and 465 radio base stations, and replaced signal systems on 4,700 miles of track, with the remaining 2,800 miles slated to be completed by 2018’s end.

Operating certain trains post-deadline would be an “outright and untenable violation” of law that could lead to fines and the loss of public confidence, Ward believes.

“Any accident involving Amtrak, commuters or TIH products would expose CSX to huge potential liability for operating in violation of federal law,” he wrote. “We must act consistently with respect to Amtrak service, commuter operations and the transport of TIH products on [our] lines, and we do not, at this juncture, believe we can undertake the legal exposure that would result from continuing those operations after the statutory deadline.”

Neither do some commuter railroads. Metra likely will suspend operations in Chicago unless the deadline is extended, wrote Executive Director and CEO Don Orseno.

Otherwise, the railroad would be subject to potential FRA enforcements brought by the U.S. Department of Justice, including substantial civil penalties, compliance or emergency orders, and injunctions or criminal penalties, according to an analysis by Metra’s law department.

A shutdown would be devastating for the railroad’s 300,000 daily riders, wrote Orseno, adding that the vast majority of them likely would be forced onto the region’s already congested roads.

Metra expects full implementation in 2019, although several lines might be PTC-compliant before then.

But there’s no crisis planning under way at the Southeastern Pennsylvania Transportation Authority, which expects to be one of the few to meet the mandate. Nonetheless, rushing implementation before a new signal system is fully vetted could create false confidence in an untested system and impact service due to functionality problems, wrote former GM Joseph Casey, who retired Sept. 30.

“Additional time to phase in implementation on a line-by-line basis would minimize PTC-related service interruptions and customer inconvenience,” Casey wrote.

The potential service ramifications drew the attention of House Transportation and Infrastructure Committee leaders, who on Sept. 30 introduced the Positive Train Control Enforcement and Implementation Act (H.R. 3651). The bill would extend the deadline to 2018’s end.

“Railroads must implement this important but complicated technology in a responsible manner, and we need to give them the necessary time to do so,” said U.S. Rep. Bill Shuster (R-Pa.), the committee’s chairman, in a press release.