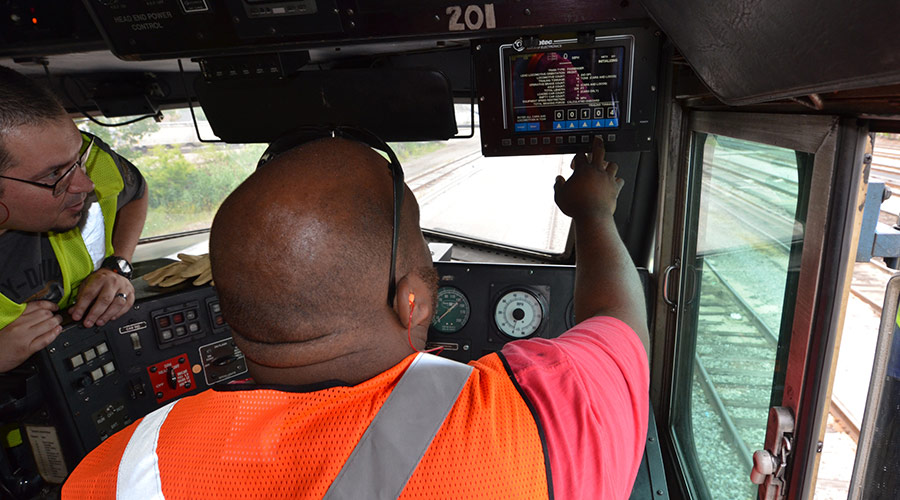 As of March 31, 98 percent of the nearly 58,000 route miles subject to the federal mandate were either in revenue service demonstration (RSD) or in revenue service, according to the latest PTC progress report released last month by the Federal Railroad Administration (FRA).

Although most commuter railroads are on track to make it across the finish line in time, some have faced challenges with software bugs or delivery delays and limited qualified workforces, among other issues they are dealing with in the eleventh hour.

The FRA considers these four railroads at risk of not fully implementing a PTC system on all required mainlines by the deadline: Metra, New Jersey Transit, TEXRail and New Mexico Rail Runner Express.

Despite making the FRA's most recent at-risk list, Metra is on track with meeting the deadline for its $416 million implementation plan, says Chief Operating Officer Bruce Marcheschi.

Nine of 11 — or nearly 82 percent — of the Chicago commuter railroad's PTC system is operating in RSD. The two remaining lines, Milwaukee North District and Milwaukee West District, were in field testing last month. The railroad is awaiting updated dispatch system software from its vendor in order to start RSD on those lines in July, Metra officials said.

The delayed delivery of the software forced Metra to adjust its implementation plan, they said.

"In [the FRA's] minds, that's putting us into the risk zone," said Metra Chief Operating Officer Bruce Marcheschi. "But since February, we've been in constant communication with the FRA, showing them the progress we've made."

Last month — despite the COVID-19 pandemic prompting reduced ridership and modified train schedules — Metra began running 75 percent of the 149 trains on the Electric Line to get more crews acclimated and experienced with the PTC system currently in RSD on the line.

"Once that 75 percent is running solid with all of our crews to get more experience, we're going to run non-revenue trains during the day and bring it up to 100 percent of the 149 trains, even though they'll be running [without riders]," Marcheschi said.

Because of PTC implementation work, Metra last month reduced the number of trains that run on the Electric Line between downtown Chicago and the area's southern suburbs from 155 trains to 149 trains.

The previous commuter-rail schedule required Metra crews to "flip" trains in under 10 minutes, or turn around trains at Millennium Station in Chicago so that they can run more inbound trips during the morning rush period, Metra officials said. That process requires engineers to move to the opposite end of the train, crews to clear the train of riders, workers to perform a brake test and all involved to hold a job briefing.

With PTC enabled, the engineer also must initialize the system before each trip. This multi-step task requires more time to complete a flip, so Metra reduced the number of trains on its line.

Meanwhile, NJ Transit began RSD in the first quarter on the 17-mile Morristown Line between Summit and Denville, New Jersey, according to the FRA's latest progress report. The railroad also continued field functionality testing on the Morristown Line and a portion of the Montclair Boonton Line, and conducted data collection testing on six of its 11 lines.

NJ Transit continues to conduct nonrevenue testing on its other lines and is working with Amtrak and freight railroads to ensure interoperability of all PTC systems, agency officials said in a February press release.

The FRA listed NJ Transit as an at-risk railroad because it was operating its Advanced Speed Enforcement System II in RSD on just 5 percent of its 317.3 PTC-mandated route miles, and none of its tenant railroads had achieved interoperability as of March 31.

In addition, NJ Transit requires an updated version of its onboard software that is still undergoing initial testing, according to a May 21 letter FRA Administrator Ronald Batory wrote to New Jersey Gov. Phil Murphy and New Jersey Department of Transportation Commissioner Diane Gutierrez-Scaccetti.

On the other hand, Trinity Metro's TEXRail in Fort Worth, Texas, is entirely in RSD with its PTC system. In mid-May, railroad officials told Progressive Railroading in an email they anticipated completion by June's end.

TEXRail was originally listed as at risk because, as of March 31, it had not begun operating in RSD on any of its 25.3 PTC-mandated route miles and none of its three tenant railroads had achieved interoperability.

Since early in its implementation, Trinity Metro has faced challenges with vendor and workforce availability.

"There is more work than people with the necessary expertise," explained Reed Lanham, Trinity Metro's deputy COO of rail. "Individuals sometimes have more than one role, which can cause delays. We have overcome challenges by staying in constant communication. Our team meets frequently and has honest discussions about what can be done."

Still, the railroad is on track and Trinity Metro leaders are confident about meeting the implementation deadline. The team is working closely with contractors on a daily basis to ensure milestones are met, said Lanham.

In Albuquerque and Santa Fe, New Mexico, the Rio Metro Regional Transit District had not begun operating its PTC system in RSD in Q1 on any of its approximately 96 route miles over which its New Mexico Rail Runner Express (NMRX) and/or Amtrak provide service.

In addition, the NMRX team reported that none of its tenant railroads had achieved interoperability as of March 31, according to a May 21 letter the FRA's Batory wrote to Rio Metro's Transportation Director Terrence Doyle.

"NMRX and its partners must intensify their efforts to fully implement an FRA-certified and interoperable PTC system on NMRX's applicable lines," Batory wrote.

To meet the deadline, the NMRX must accelerate and finish outstanding field testing; initiate RSD and extend it to its remaining applicable lines; perform interoperability testing and achieve interoperability with each applicable tenant railroad; submit a PTC safety plan and obtain the FRA's certification of its PTC system, Batory wrote.

Conversely, the Denton County Transportation Authority (DCTA)'s A-train commuter-rail system, which connects the Denton and Dallas counties in Texas, is running in extended RSD and awaiting FRA review of its safety plan.

While in good standing and on-track to meet the deadline, the DCTA's implementation process hasn't advanced without challenges.

The railroad has experienced minor contact, or shunting, issues that require frequent scrubbing of the rails so that no rust forms on the surface and rail-to-wheel contact is maintained, said DCTA's Director of Railway Systems Rony Philip. The increased scrubbing has resulted in less PTC penalty enforcements.

Once DCTA receives certification by Dec. 31, the agency plans to enter a second phase of PTC implementation that hopefully will allow the railroad to decrease its run times, he said.

Thanks to a nearly $4 million Consolidated Rail Infrastructure and Safety Improvements grant from the FRA in 2018, the agency plans to fine-tune its PTC system and work on restoring its travel times back to its previous schedule as part of a Phase 2 implementation.

With six months left until the deadline, the FRA, American Public Transportation Association (APTA) and commuter railroads are working together to achieve implementation.

For example, Caltrain is employing Wabtec Corp.'s Interoperable-Electronic Train Management System and coordinates with other commuter railroads that use that PTC platform.

"As a group we've made a big effort to really help each other to get everybody across the finish line," Scanlon said. "There's been a lot of good information exchange. It's been really great to see how the industry has responded to help each other — especially amongst the commuter railroads — to ensure … [we] get everybody across the finish line."

Meanwhile, the FRA is encouraging state departments of transportation and governors to help any at-risk commuter railroads in their states to ensure they have sufficient technical resources and support to meet the deadline.

"I'm pleased with the growing number of railroads that have reached critical milestones, and continue to encourage all of them to help each other overcome any remaining challenges from their respective lessons learned," Batory said in a May press release.