The Virginia Railway Express (VRE) board installed its 2016 roster of officers at its monthly meeting last week.

Gary Skinner was elected chairman and Paul Smedberg, vice chairman. Skinner serves as supervisor of Spotsylvania County, Va., and Smedberg serves as councilor for the city of Alexandria, Va.

The board's other new officers and there positions are Maureen Caddigan, secretary; Sharon Bulova, treasurer; and John Cook, immediate past chairman.

"We are very fortunate to have such a well-respected and knowledgeable group of public officials that really care about improving VRE serve as Operations Board officers," said Doug Allen, Chief Executive Officer of VRE. "Their leadership and guidance will contribute to our continued success." 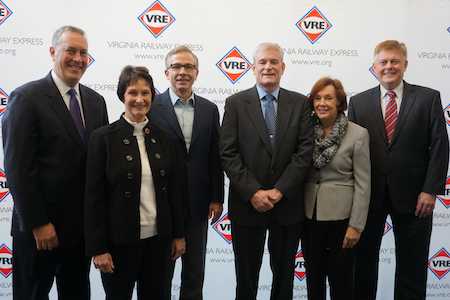