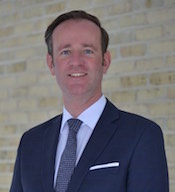 Plasser American Corp. has named Thomas Blechinger president. He succeeds Gunther Oberlechner, who retired after serving at the company for more than 40 years, company officials said in an emailed announcement.

In 1991, Blechinger joined the rail industry in Europe as an apprentice.

Over the past 25 years, he's held various senior management functions and most recently served as vice president and general manager at Plasser.