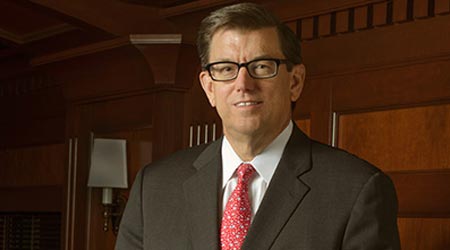 As chairman, Ottensmeyer will oversee the council's efforts to strengthen bilateral commercial ties by engaging with public- and private-sector leaders in the United States and Mexico. He also will preside over the U.S.-Mexico CEO Dialogue, which occurs twice annually.

Ottensmeyer is a "highly respected leader" in U.S.-Mexico relations, said Myron Brilliant, executive vice president and head of international affairs for the U.S. Chamber of Commerce, in a press release.

"Not only does [Ottensmeyer] lead a company that connects the integrated North American economy, but he has also demonstrated a continuous commitment over many years to promoting and strengthening the bilateral relationship through engagement with government officials, private-sector peers, and the public," Brilliant said.

Ottensmeyer said he is honored to accept the chairmanship to continue the council's work of ensuring a strong economic and trade relationship between the two nations.

"The council and its U.S.- Mexico CEO Dialogue are comprised of committed business leaders, who have been working together for more than five years and who provide a unique connection between private-sector leaders and government policymakers," he said.