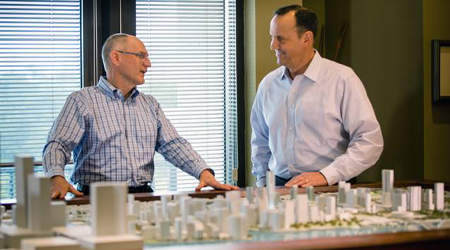 Brightline officials announced today that the new passenger-rail service in Florida is expanding its management team, including the hiring of Dave Howard as chief executive officer.

The company also announced that Michael Reininger will lead new development and growth as executive director at Florida East Coast Industries, Brightline's parent company. Since 2012, Reininger has served as Brightline's president, leading the strategy, design and execution for the company, including transit-oriented development.

Additionally, the company announced Patrick Goddard, who serves as Brightline's executive vice president of operations, has been promoted to chief operating officer. Together with Howard, Goddard will lead the day-to-day operations of Brightline trains and stations.

Brightline is a privately funded express passenger-rail service that will launch later this year in Florida. The first leg of service, scheduled to begin this summer, will connect Miami, Fort Lauderdale and West Palm Beach. Eventually, the service will extend to Orlando.

In his new role, Reininger will be dedicated to Brightline's expansion, company officials said in a press release.

"We are poised for tremendous success this year and excited to complete our leadership team as Brightline makes the dramatic transition from building to customer operations," said Reininger. "Dave Howard is a proven executive with the leadership qualities that will ensure our customer service and experience are unparalleled."

Howard began his new duties on Monday. He is a veteran of the sports and entertainment industries, having served in the Office of the Commissioner of Major League Baseball, in expanding responsibilities with the New York Mets for more than 20 years, and as president of MSG Sports.

"I am honored to have the opportunity to help build a business that is so important to the state of Florida," said Howard. "We're introducing a much needed alternative transportation solution for Floridians and visitors that will transform the regional economy and downtown cores."