Batory sworn in as FRA administrator 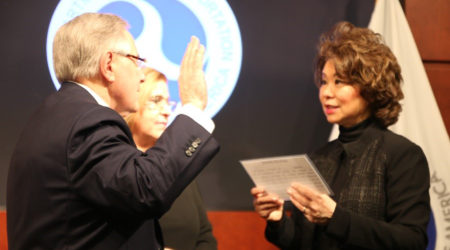 Ronald Batory was sworn in yesterday as the 14th administrator of the Federal Railroad Administration (FRA).

Prior to his nomination, Batory served as president and chief operating officer of Conrail until his retirement in April 2017. Before that, he was president of the Belt Railway Co. of Chicago.

Throughout his 45-year rail career, Batory has worked for small and large railroads across the United States. As FRA administrator, he will aim to use "data-driven decision making to further enhance safety while embracing ... new technologies that will revolutionize America's rail transportation network," Batory said in a press release.

In mid-February, the U.S. Senate confirmed President Donald Trump's nomination of Batory to head the FRA.